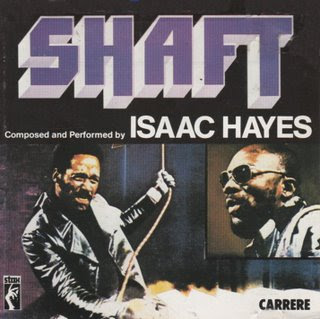 While watching this year's Academy Awards, I caught a fleeting glimpse of footage from when Isaac Hayes performed the theme song from Shaft during the Oscars way back in '71. I could see that he was accompanied by dancers, and right then I decided I wanted to see the entirety of that footage.

So yesterday I journeyed to The Paley Center for Media (originally the Museum of Radio and Television) on 52nd Street. I elevatored up to the 4th floor and hopped onto their database to find the 1971 Oscars. The listing appeared as "Tape 1 of 3" and also said in brackets "Warhol Vintage Television." The running of time was listed as 28 minutes and 55 seconds. That seemed odd, given that the Oscars last for 3 to 4 hours. The guy at the help desk was tied up on the phone so I figured what the heck, I'll just go down to a screening booth and see what this is all about.

So down I went to the screening room and entered the program's code. What it turned out to be was this: Andy Warhol had set up a tripod and filmed the Oscars from his own home. So the program alternated between his shots of the show and shots of his friends lounging around while watching the show. In the backdrop were Andy's continuous and barely-audible comments about everything on the Oscars.

When Isaac Hayes came on the Oscars, Andy did catch it on film and made his running commentary. To me, it was an irritating blur of images, music, Isaac's voice, and Andy's voice. So I snapped it off and ran back up to the database room to find something else.I entered "Jim Henson" and "Muppett Show" and scrolled down 'till I found a vintage episode of Sesame Street which featured Lena Horne, The Globetrotters, and Stevie Wonder. Yay!

Back downstairs, I got to see a full commercial-free hour of Sesame Street Episode 536 when Maria and Luis were young adults, when Snuffy was still on the show, and when the pace of the slow was much, much slower.

After watching Sesame Street, I went back down to the lobby of the Paley Center to see a wall and video exhibit about women who have helped to shape the history of media. She Made It: Women Creating Television and Radio "celebrates the achievements and preserves the legacy of great women writers, directors, producers, journalists, sportscasters, and executives."

My adventure led me from the 80th Annual Academy Awards to Isaac Hayes to Andy Warhol to Sesame Street to Women Creating Television and Radio. I love how living in New York makes these kinds of adventures possible.
Posted by Eleanor Traubman at Tuesday, August 12, 2008