It's one thing to read a book by Roald Dahl, but it's quite another to see his books brought to life by an entire school.

Last Saturday, when I entered the playground of PS 32 in Brooklyn, here's what I saw:  Parents, children, and teachers dressed as characters from Road Dahl books such as Fantastic Mr. Fox,  Charlie and the Chocolate Factory, and The Witches.  I saw families playing games based on Dahl books.  I heard songs from the Charlie and the Chocolate Factory movie soundtrack floating in the air.  I felt the magic of these books embodied by a whole community of readers.

The principal, Ms. Florio (see photo above), was dressed at The Golden Ticket from Charlie.  "The art teacher, Dave,  made this costume for me," she proudly shared.  The back of the costume read, true to the ticket described in the book, "In your wildest dreams you could not imagine the marvelous surprises that await you!"

Over in another corner, a student was dressed like Violet when she turned into a blueberry.

A father and a daughter wore costumes which depicted the foxes from Fantastic Mr. Fox.

After milling around and taking in the pageantry, I stopped to listen to some of the people who had made this event possible; these included school librarian Adam Marcus and Deborah Florio, the principal.  School Chancellor Carmen Farina, who has a 30-year relationship with PS 32, also spoke to the crowd. Off to the side, I chatted with  Francine Cuomo, the school's Business Manager.  Ms. Cuomo, who had worked hard to help build the library and organize the day's event, was heartened by the impact of the library on the school culture.  Dave Chimoskey, the school's art teacher, was also instrumental in creating the enchanted event.

So how did this event, with its beautiful community of readers, come to be?

In the summer of 2009, Principal Florio asked teacher Adam Marcus to build a library for PS 32.  Marcus, with the help of a library advisory committee, raised more than $500,000 to create what would become the hub of the school.


Fast-forward to 2014, when PS 32 became one of 20 schools in the country to receive a Roald Dahl Charlie and the Chocolate Factory grant.  The grant was bestowed by Penguin Young Readers Group as a team with First Book Advisory Boards in celebration of the 50th Anniversary of the legendary book.

The honor included multiple copies of all Dahl's books, a giant Charlie bean bag for the library,  and last Saturday's party, which was sponsored by First Book, Penguin Publishing,  Hay Rosie Craft Ice Cream Co., and The Chocolate Room.  The party, took place on September 13, Roald Dahl Day, and was generously staffed by 70 volunteers from places like Good Shepherd Services and The American Association of Publishers.

On a personal note, I am greatly inspired by the work and imagination that this school's teachers, administration, and parents have invested in creating the gem that is the PS 32 library.  Many public schools nowadays do not have a library, or have turned their library into a computer center.  What better way to foster young people's love of reading by building a beautiful, comfortable, cozy, friendly space where a child (or an adult!) can plop down on a couch and bury her nose in a book.

Keep up the great work, PS 32!!
Posted by Eleanor Traubman at Tuesday, September 16, 2014 No comments: Links to this post 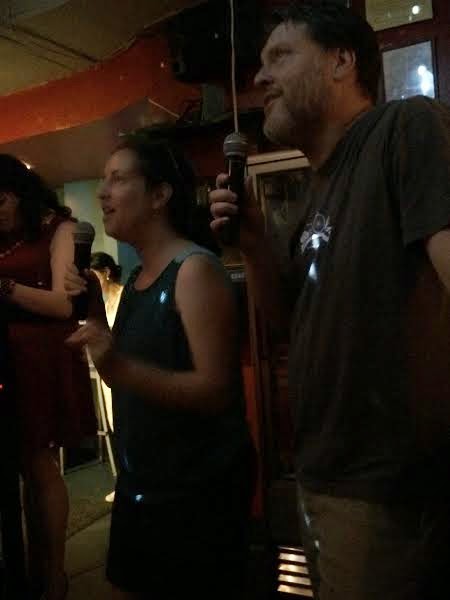 The song "California Girls" by The Beach Boys is pretty sexist, but I had fun singing it with my husband Mike Sorgatz last Friday in front of a group of people.

We had zipped through a little Red Hook Gallery exhibit and wanted a bite to eat.  "How about Hope and Anchor?" I suggested.  It was a small, fun, neighborhood-y diner-like joint in Red Hook with super decent prices and stuff we normally do not have at home.  (Mac 'n' cheese fritters, anyone? Definitely a sometimes treat!)

We sat down to order, and eventually a family with two young daughters came in.  They both looked super excited to be there, and they were definitely there on a mission.  That mission was to sing as many songs as they could on Karaoke Night.

Every Friday and Saturday evening, the owner Pete gets into drag, hands out huge books with thousands of song choices, and tells folks who want to sing to write down the name and number of the song on a post-it before handing it to him.

Pete - a/k/a Stella Dora - is a great host.  S/he has a great sense of humor and a pleasant singing voice, but lets the guest singers shine, too.  The two aforementioned sisters, around 12 and 7, sang about 8 songs together.  Some of the wait staff sang, and one young man boisterously belted out the theme song to Sesame Street. I couldn't help but high-five him when he was done; his enthusiasm was contagious!   The songs ranged from Daft Punk's "Lucky" to Bobby Darin's "Mack the Knife" to Journey's "Don't Stop Believin'".   Ah, memories!

I was one of those children who was always making up songs, dances, plays, musicals, and radio shows, so karaoke was right up my alley.  It was so great  to sit there and sing along to songs from a variety of decades.  And even more fun to do it in a small and cozy neighborhood setting with an expert host.

Was I nervous getting up in front of the group?  Yes!  But no one cared what your voice sounded like.  It was all about fun and participation.

We will definitely be back!
Posted by Eleanor Traubman at Tuesday, September 02, 2014 No comments: Links to this post