More than 40 local restaurants, distilleries, and wineries will offer a wide sampling of their signature dishes and drinks. “Taste of Red Hook” is the annual fundraiser for the Red Hook Initiative (RHI), a community-based nonprofit that works to confront poverty through a model focused on youth development, community building, and local hiring.

"Taste of Red Hook is a unique event in our neighborhood," says Jill Eisenhard, RHI's Founder & Executive Director. "It is one of the few occasions where small business owners, home owners, public housing residents, elected officials, and local supporters are all gathered under one roof. Not only is it a fun event, the proceeds also contribute to true systemic change and pathways out of poverty for Red Hook youth."

"We've participated in Taste of Red Hook since it first began eight years ago, and are proud to be a part of it," says Ben Schneider, co-owner of The Good Fork, a nationally acclaimed restaurant. "Taste is a special night of the year when Red Hook businesses get together to eat, drink, and celebrate our community."
All proceeds from Taste of Red Hook go to RHI, winner of the 2012 New York Magazine Award for Excellence in Nonprofit Management. RHI employs over 100 local residents, a majority of whom are teenagers or young adults. Many of these youth participants will be present at the event to speak about their role at RHI.
Tickets for RHI’s only fundraiser of the year are available on the RHI website: www.rhicenter.org
This year's event is sponsored by Terra CRG, The O'Connell Organization, aptsandlofts.com, Kamco, Koya Leadership Partners, Massey Knakal, New York Water Taxi, EILEEN FISHER and International School of Brooklyn.
The following establishments are some of those that will participate in Taste of Red Hook 2014: Alma, Baked, Blue Marble, Brooklyn Crab, Brooklyn Ice House, Court Street Grocers, Defonte's, Fairway Catering, Fleisher's Pasture-Raised Meats, Fort Defiance, Good Fork, Grindhaus, Hometown, Hope & Anchor, IKEA, Jack from Brooklyn, Kevin's, La Slowteria, Margaret Palca Bakes, Mark's Pizza, Nightingale9, Pok Pok NY, Raaka Chocolate, Red Hook Bait & Tackle, Red Hook Lobster Pound, Red Hook Winery, Six Point Craft Ale, Steve's Key Lime Pie, The Chocolate Room, Uncouth Vermouth, Van Brunt Still House, Whipped Pastry Boutique, and Widow Jane.
Posted by Eleanor Traubman at Wednesday, August 27, 2014 1 comment: Links to this post

BIKIN' IN BROOKLYN: IT TOOK A VILLAGE TO RAISE A CYCLIST 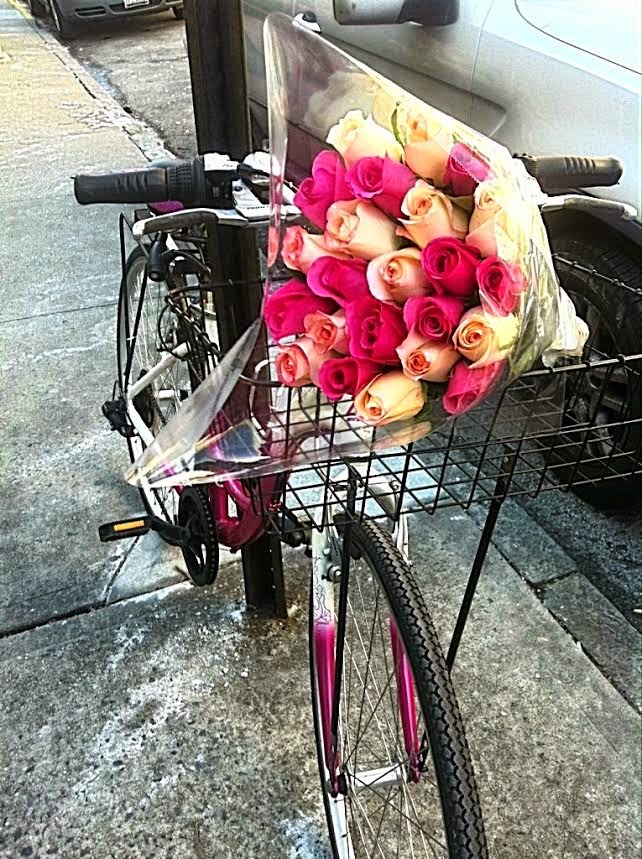 I am proud to be a lady biker.  A Brooklyn-based lady biker.
But I wasn't always one.  I was too scared to ride a bike alone and in traffic.

My man bought a bike for me many years ago when we were newer to Brooklyn.  I rode a few times with him, and that was it.  I was too scared to ride in traffic on my own, so Pink Bike sat idly, chained up to to a street sign on our block.

Years passed.  I joined a health support group at a local YMCA. We set goals each week and rallied around each other to reach those goals.  One week, I said to the group "I am going to get on my bike and ride it for TWO BLOCKS to the neighborhood park." "That is a great goal!" said the group.

I was scared, I mean really scared, to get on the bike without the company of my husband.  I did not know traffic rules.

But I got on the bike, and started pedaling toward the park.

Once my trip was underway, a strange thing happened: I got to the park, but instead of stopping there, I kept pedaling.  I somehow remembered the way, more or less, to a path by the water that went through Brooklyn Bridge Park and then into DUMBO.

Wait a sec, how did this happen?

I pedaled home, not believing what I had done.  When I got off my bike to lock it up, I was shaking pretty hard.  I don't know if it was from fear, fatigue, or both.

But I had done it - I had ridden my bike through traffic all by myself!

It's weird, because adults aren't supposed to get excited when we overcome fears.  But I think we should! And we should celebrate our successes and share stories of overcoming fears with other adults.  Why?  Because it breaks down the isolation we experience around the fears we carry, and  because we can help inspire each other to address our fears with support.

Example:  I was chatting with one of the employees of the place where I bank.  He told me he would love to learn how to swim, but never had taken it on because of a near-drowning experience he had when he was very young.

I told him about my experience with riding a bike alone. I said that I thought it was much easier to deal with fears with the support and accountability of a group, like the one I was part of at the Y.  I told him that the Y taught people just like him how to swim.

The next time I came into the bank, I asked Banker Man if he had taken any steps toward swimming. He said he had told his girlfriend about the idea, and that they were thinking about taking a swim class together.  I was so excited to hear this!

Back to biking for a minute.

There are some other things I did to keep building courage and support around being a lady biker.  I discovered a great organization called WE BIKE NYC.   WE BIKE is a community of women who ride bikes and who provide a safe space for women to ride together regardless of speed, skill, and riding style.  Every month, they offer different events to get more women on the road. These events include social rides, training rides, mechanics workshops and field trips.

I went to a WE BIKE Rules of the Road workshop, a social gathering at a Lower East Side bar, and met up with some WE BIKE cyclists in Red Hook after they had rode their bikes in from Manhattan.  (I'm not quite ready to do the Brooklyn-Manhattan round trip yet.)

I also went to the New York Bike Expo just to hear a group of women panelists speak about Women's Biking in NYC: Your Questions Answered.  Very inspiring!

And guess what?  I did once injure myself, trying to be a bad-a**. Yes, that's right, I tried to jump a curb, but did not have enough speed to clear it.  So I sustained a painful soft tissue injury on my hand for a number of months.  But I survived and kept going.

Now, basically anywhere I would normally walk to, I ride my bike.
Also, my bike has gotten me out of some pinches, like the time the F train was not running and I was going to be late for a doctor's appointment where I would have been fined for not showing up.  I hopped on my bike, raced through traffic to another subway line, and got to my appointment.

One last thing:  I am still scared when I ride my bike.  But I am also having a great time.  I am so glad I decided to push past the initial fear, with the help of a great group, and pursue my desire to ride. 'Cuz now I can ride like the wind!

Do you have any fears that you have overcome with the help of a group or another person?  Do you have any current fears you would like to overcome?  What might be a next step for you?

Do you have a fitness or movement goal of your own?  Would you like to start taking better care of yourself on a day-to-day basis?
Imagine if you had your own personal cheerleader while you took on these goals to make them realities!
I coach women who want to create increased joy, energy and confidence that comes from regular physical movement and other self-care practices

Right now, I am offering a 30-day program which includes the following:
-Weekly coaching calls
- Email check ins
- Motivational messages
- Self-care tips
- Strategies to get you moving in ways that are satisfying and pleasurable to you
- Techniques  for addressing internal and external barriers to getting more physically active and taking better care of yourself
Contact me if you are interested in setting up a complimentary 20-minute discovery session.


ETraubman@gmail.com
Posted by Eleanor Traubman at Monday, August 11, 2014 No comments: Links to this post 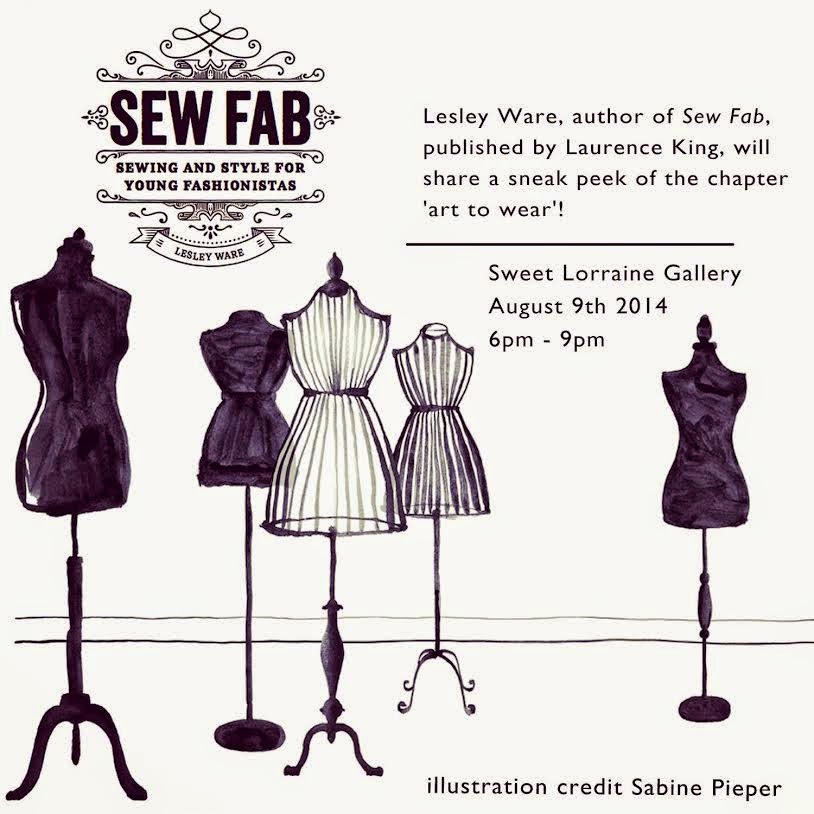 I am beyond excited that my friend Lesley Ware will be hosting a sneak preview of Sew Fab: A Guide for Pre-Teen Fashionistas,  the book into which she has poured her heart, soul, and wisdom.

Lesley has spent the last bunch of years teaching sewing to girls, and leading fashion camps where girls get to conceptualize and create their own fashion designs.  And now we get to glean all of her amazing expertise as a teacher, fashion expert, mentor, and skilled artist, and craftswoman.

I hope to see many people I know at her book preview.  She will be showing some of the projects featured in the book.

Lesley, I wish you much success and many adventures with your soon-to-be published book!

Here are the deets of this Saturday's gathering:

Posted by Eleanor Traubman at Wednesday, August 06, 2014 No comments: Links to this post