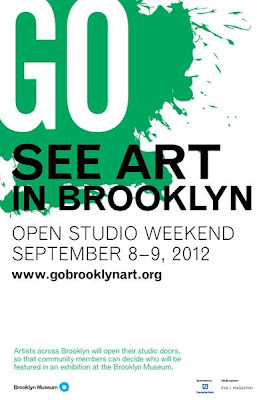 Did you know that more than 1800 Brooklyn artists will open their studios to the public on September 8 & 9?

72 of these studios are in Cobble Hill, Boerum Hill, & Carroll Gardens.

GO is a new project at the Brooklyn Museum, taking place in neighborhoods throughout Brooklyn. During GO, Brooklyn-based artists will open their studios to the community on September 8–9, 2012.

Community members registered as voters will visit studios and nominate artists for inclusion in a group exhibition to open at the Museum on Target First Saturday, December 1, 2012.

A CLEAR CUT SPACE FOR WOMEN IN HIP-HOP

For two nights in a row, the audience sprang to its feet to cheer, yell and stomp in a standing ovation for "Paying Homage," a hip-hop piece choreographed by Akira Armstrong for the dance group Pretty Big.  People were psyched out of their minds to see this tribute to female MCs from the last two decades, a list which included Roxanne Shante, MC Lyte, Da Brat, and Queen Latifah. The mood of the piece was joyous and celebratory, but also proud; never over-smiley, the dancers wore facial expressions that read "We are the real deal and we take ourselves seriously."

"Paying Homage" was one of many outstanding dance numbers presented in the 8th Annual Ladies of Hip- Hop Festival, an event brought to New York by Michele Byrd-McPhee.  Women came from all corners of both the U.S. and the globe to compete in a Ladies Battle, participate in two days of dance workshops, and dance in two consecutive nights of performances.  A full agenda for sure, and reflective of the many dance forms that fall under the umbrella of hip-hop, including waacking, krumping, dancehall, popping, house, and flexing.

Ms. Byrd-McPhee gave form to the Ladies of Hip-Hop Festival out of an awareness of "the narrow opportunities for women in Hip-Hop" and a desire to create "a safe space, a neutral zone where the art does not get lost or stifled because of complexities of male/female relationships. Spaces were it is okay to be women as you define it, not as defined by others. " (Source: LOHHF website.)

Everything about the two nights of performances showed that creating a space in hip-hop where women can define themselves has enormous payoff.

First, there was the overall spirit/mood/vibe of the performance nights.  The host, Shernita Sofly, put the audience at ease with her hugely funny and off-beat humor, and ability to connect with what the audience was doing and feeling in the moment.  By cutting loose and having fun, she set things up so the audience could do the same.

Then, there was the awesome diversity of how the women presented themselves - playful, raw, rough, angry, sensual, sexual, graceful, defiant, athletic.  Yet all of this never seemed forced or externally imposed; every feeling and image conveyed seemed to come from within.  The dancers fully inhabited their bodies, quite a departure from the way much of dance for females is structured so that we are treated as the vessels for someone else's vision or are put out there just to please or pacify a crowd rather than to challenge the audience emotionally or intellectually.

You could see from the backstage and off-stage interactions between the dancers as well as the interplay between audience and performers that all of this was a team effort; everything in the festival was about women backing other women.  Also: whenever Michele, the LOHHF Founder and Director got up to speak, she made sure to credit all the other women who supported her and were part of her team.  She made it clear that it took a village to raise a festival.

Women from the audience (including other dancers) cheered fiercely and joyfully for women onstage.  Choreographers designed pieces so that dancers visibly pulled for each other while performing.  A great example of that was "Gracefully Strong," choreographed by Valerie Chartier for the krumping crew Buck Swans.  While each krumper stepped forward for her solo, the others would surround her and emotionally and physically validate what she was expressing through her body. The effect was gripping.

In sum, a clearly-defined space for females in hip hop to lead other females and be led by other females looked good on everyone involved - both performers and the audience.  Right there in the theater, I could feel the effects of racism and sexism melt under the intelligence, leadership, and serious artistry of a mighty army of women.
Posted by Eleanor Traubman at Monday, July 16, 2012 No comments: Links to this post


Wow, is top chef Marcus Samuelsson ever making the rounds to promote his new book Yes, Chef. I didn't want to miss out on all the excitement, so I went with Mike Sorgatz (of the blog Art in Brooklyn) and Wendy Todd (chief pop culture writer over at Cocoa Popps) to hear fashion designer Isaac Mizrahi interview Mr. Samuelsson at PowerHouse Arena in DUMBO.

For starters, I loved the way Wendy went right up to Mr. Samuelsson to ask for a video interview (which he granted!) and also asked Mr. Mizrahi for a mini interview and photo opp. at the end of the formal part of the evening.  Love her courage and forthrightness when it comes to approaching the celebs!

Wendy, Mike and I sat in the front row, just a few feet away from where Isaac and Marcus were sitting in comfy living-room style chairs with a lamp in between them.  Close enough, in fact, to admire Isaac's glitter-polished toenails and Marcus' uber-fly gold and black Basquiat high tops.(!)

Right off the bat, Isaac addressed the lonely tone of the book and Marcus' life story, commenting to the effect of "You've chosen to devote your life to food at the exclusion of almost everything else."  Marcus did not deny this fact.

"What would your advice to young, coming-up chefs be?" Isaac asked of Marcus a bit later in the dialogue.

Recalling some his own adventures in travel, Marcus shared the time that he went to an underground source for purchasing blow fish with the only cash he had.  Underground, he explained, because when you eat blow fish you run the risk of ingesting poison. "It was a beautiful [kind of] broke", reflected Mr. Samuelsson.

"What inspires you?" asked Isaac of Marcus, to which Marcus replied: "My neighbors, artists, the photographer Gordon Parks, and young people's energy - the kind you see in the people who ride their skateboards to work."

"What are the main components of being a chef?" asked Isaac.

Isaac: "What motivates you?"

Marcus:  "There is always more to add to the food conversation."
Posted by Eleanor Traubman at Friday, July 13, 2012 No comments: Links to this post 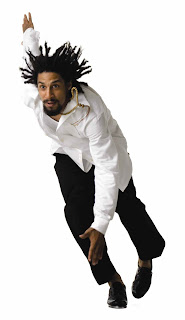 I was excited to hear that tap dancer Jason Samuels Smith was going to appear at The Joyce Theater.  I had seen him on stage  during the 90s when he was a teenager - eons ago it seems - in Broadway's Bring in 'Da Noise, Bring in 'Da Funk.

I was pretty much obsessed with tap in those days.  I saw Bring in 'Da Noise/Funk umpteen times, and I also traveled to Manhattan  jazz venue Swing 46 in the days when tap legend Buster Brown hosted tap jam sessions.  There was a live jazz band and anyone who wanted to - from young children to elderly folks - could put on their tap shoes, tell the band what song to play, and hit the dance floor.  Sometimes, cast from Bring in 'Da Noise would show up, and that's when things would get really exciting.

Coming off of choreographing and starring in Bring in 'Da Noise, tap pioneer Savion Glover performed in both solo shows and with his troupe - NYOT (Not Your Ordinary Tappers), of which  Jason was a member.

After the 90s, I did not track the tap scene as carefully.  So it was great to have this opportunity to be pulled back into the tap world vis-a-vis a  tap production choreographed by Mr. Smith.  I liked that he included three women lead dancers, plus another former Bring in' Da Noise/Funk cast member, Bakari Wilder.

Mr. Smith formulated the idea for the show back in 2006 when he performed in the world premiere production of Imagine Tap! At that time, he developed the idea to "transpose the music of Charlie Parker into tap dance" (Program Note).  Out of this idea, he choreographed Charlie's Angels: A Tribute to Charlie Parker and Chasing the Bird, both of which were showcased at the recent evening at The Joyce.

For more information about the extremely accomplished Jason Samuels Smith, click HERE.
Posted by Eleanor Traubman at Friday, July 13, 2012 No comments: Links to this post