Earlier this year, when I first got wind of the news that there would be a tribute to the musical world of Jim Henson, I knew I had to be there.  If you've watched  any of Jim Henson's films and television shows, you know that MUSIC played an integral role to his productions. Plus, how often does a person get to see the whole lot of the Muppets perform alongside of the New York Pops and singing group Essential Voices USA?

As the big day of Jim Henson's Musical World approached, the excitement ramped up.  Since the original posting of the event, Carnegie had added a long list of special guests and performers, including comic Rachel Dratch;  Avenue Q performer John Tartaglia (who hosted the event); Elmo's Muppeteer and Sesame Street Co-Producer Kevin Clash; singer/songwriter Paul Williams; past and present cast of Sesame.

On the way over to the show, my husband and I both recognized Tau Bennett, the boy who appeared in Being Elmo because he had been mentored by master Muppeteer Kevin Clash. Tau was walking toward Carnegie Hall with his family.  Something about seeing Tau, and knowing he had traveled from Atlanta to be here for this occasion, caused a wave of emotion to wash over me.  Seeing him made me think about the way the branches of Henson's legacy continue to reach out and out and out into multiple generations, into so many homes, hearts, and lives, into hundreds of countries around the globe.

After spotting Tau, Mike and I walked into a small cafe for a pre-show snack.  There, we saw two children and their mom talking excitedly about all the Muppets they would be seeing.  Also eavesdropping on the family were two young men, who, judging by their matching all-black outfits, would be singing in the show.  I approached them and struck up a conversation.  "It really didn't hit us what we were going to be part of until we saw them [the Muppets] coming onto the stage today," they said.  "Yeah," Mike and I replied,"You should see the huge crowd of people waiting in the lobby!"

Once seated in Carnegie Hall,  I could see some of the folks from the Jim Henson Legacy milling around, including the show's writer, Craig Shemin.  I imagined he might be kind of nervous, seeing as how this was a never-been-done before kind of performance with lots of people waiting to see what would happen.

What did happen was absolutely magnificent.

Jim Henson's Musical World  began with footage of Muppet Rowlf the Dog's appearance at Carnegie Hall in 1965.  Then, good old Rowlf appeared in the flesh (or should I say in the fur), saying how he was glad to be back after 47 years.

Muppets Statler and Waldorf made an early appearance from their seats in the balcony, doing what they do best - heckling folks on the stage!

Here are some of the highlights from the rest of the show:
The real tear-jerker came when a whole bunch of people and Muppets sang Rainbow Connection.  There were few dry eyes in the audience.

I was elated to be at this monumental event where Muppets and people from all arms of Jim Henson's legacy came together to carry his message forward through music.

I have a feeling this is only just the beginning of more great things to come.

For more coverage of Jim Henson's Musical World, check out these articles:

Posted by Eleanor Traubman at Sunday, April 15, 2012 No comments: Links to this post 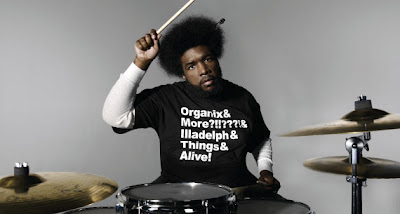 “Ahmir ‘Questlove’ Thompson just might be the closest thing we have to a hip-hop Zelig... expanding the assumed limits of hip-hop...” —Pitchfork

Ahmir “Questlove” Thompson, the charismatic drummer and producer of the Grammy Award-winning hip-hop group The Roots, comes to BAM with an immersive musical experience. Enlisting a stellar lineup of artists, Questlove and musicians perform a free-flowing playlist—a kinetic mix of songs and sounds from unexpected musical bedfellows—that celebrates and
reflects our current shuffle culture.

Conceived and curated by Questlove


My journey down began with a wish to meet and interview Kevin Clash, the Muppeteer of the show's wildly-popular Elmo and the co-author of Being Elmo: My Life as a Furry Red Monster. The wish became reality and I found myself sitting across from Kevin at Sesame Workshop, listening to him talk about his amazing life story.  At Kevin's suggestion, I went on to interview longtime Sesame cameraman Frank Biondo. Having worked on set since the show's inception, Frank had endless and wonderful stories to tell.

From Mr. Biondo, also called The Mayor of Sesame Street, I moved on to interview a bunch of other folks who have been integral to the success of Sesame - Carroll Spinney, Fran Brill, Bonnie Erickson, Martin Robinson, and Annie Evans.  Through various visits to the set of the show out in , I developed an immense appreciation for the amount of physical labor, teamwork, and attention to detail that goes into each of the episodes we see on television.  Quite astounding is how the Muppeteers perform in awkward and often tedious positions, pretzeling their bodies into impossible shapes and configurations. They do so with grace, humor, respect for one another, and complete adherence to the highest professional and production standards imaginable.

Recently, in yet another chapter of my Sesame adventures, I developed a new level of admiration for the people who work behind the scenes to create this global juggernaut. (Sesame is broadcast in more than 140 different countries.)  When last on the set (in Mr. Hooper's store!) I had the pleasure of meeting Louis Henry Mitchell, Associate Design Director of Special Projects.  When Louis invited me to visit an all-day Sesame Street photo shoot, I was thrilled, and viewed it as an opportunity to see another wing of the work that makes Sesame Street all that it is.

When I arrived at the studio, a friendly Australian shepherd named Betsy greeted me at the door.  I followed her back two rooms and found a group of people, including Louis, who were setting up and taking still shots of various Sesame Muppets sans their Muppeteers.  I immediately saw a familiar face - Lara MacLean - who had demonstrated puppetry for television at the recent Jim Henson exhibit at MOMI.  We exchanged hellos and she briefed me a bit on her history with the show.
Lara and Louis were part of the team that worked together to create flawless photos of the characters that are watched daily on television.  Similar to the filming of Sesame Street episodes, it took a village to create the final product.  There were folks who expertly set up the shot, literally splitting, brushing, combing, and arranging hair and fur to make the Muppets look their absolute best.  Another set of people sat behind computer screens, looking at the shots and making suggestions on how to improve them. They would request that a Muppet's head be moved forward or back, or a gaze raised or lowered.  There was a lot of conversing, a lot of give and take.  Lots of minds and hands and eyes working in conjunction.  The results were always gorgeous.

An hour into the shoot, another guest walked in and the day got even brighter. Devora Reiss, a student at F.I.T., showed me photos of a whole line of puppets, mostly marionettes, which she had designed and built.  Devora and I had a great conversation about religion, family, puppetry, and the importance of surrounding yourself with people who back you in going after your dreams.

During the lunch break and some relaxed late-afternoon moments, I got to chat with individual members of the crew and find out about their lives and their connection to this work. (Ask someone on a set "How did you find your way to Sesame Street?" and you will inevitably get a memorable answer.)  Folks who are part of this show come from different walks of life, but they are all firmly invested in Sesame's mission.

At one point, one of the crew came over and gave me a Rowlf the Dog keychain, a great memento. It was a small gesture, but it meant a lot.  Every time I look at it, I will think of how much fun I had that day, and how I walked away with an even deeper understanding and appreciation of the hard work, teamwork, creativity, and attention to detail it takes to keep the magic of this show alive.
Posted by Eleanor Traubman at Monday, April 02, 2012 No comments: Links to this post

ORGANIZING TIP FROM PINK MONKEY: USE "RAFT" TO KEEP YOUR DESK FREE OF CLUTTER 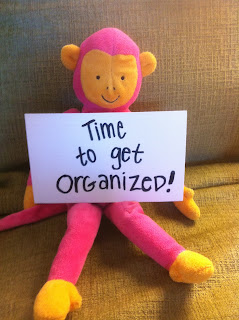 Here's an acronym to keep your desk functioning as a work space, not a storage space.


Use the RAFT acronym for dealing with incoming paper.


A= Take action on it. Pay the bill, make the phone call.

Want A Hand Getting Organized? When you hear the the words "Professional Organizer," do you picture a stern-faced woman named Bertha barking out instructions to throw out everything you own?
If you'd like some help from someone who is more easy going than Bertha, but also professional

Eleanor will help you to:
• Kick clutter’s A** !!!
• Streamline desks and closets
• Implement simple routines and systems to deal with mail and school/work papers
• Spend less time looking for stuff and more time hanging out with family & friends
• Live the motto “A place for everything and everything in its place”

A professional organizer since 1999, Eleanor helps busy New York women de-clutter and make better use of desks, closets, filing systems, and more. She has been featured in The New York Times; Time Out New York; The Brooklyn Paper; Park Slope Parents; Family Circle; The Sun Times Chronicle; and Fitness. Eleanor is also a  Editor-In-Chief of Creative Times.
Posted by Eleanor Traubman at Monday, April 02, 2012 No comments: Links to this post