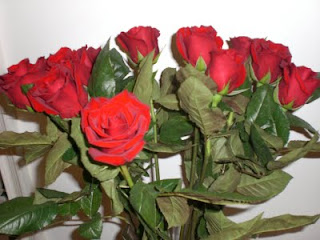 You may be in high spirits and find satisfaction in being active today. Perhaps your good mood is the result of your deep sense of pleasure with life and your desire to absorb everything it has to offer you. Gathering together with friends or engaging in vigorous activities such as sports could further ignite your enthusiastic feelings. If you find some way to marry your passionate feelings today with your zeal for life, you may notice that your sense of time and place dissolve and that you become one with the energy of the universe. Sharing these feelings with others could create a space where everything you do together is beautiful, inspired, and filled with the delight of the present moment.

Savoring the feelings of pleasure and enjoyment we have with our loved ones cultivates a supportive, loving, and fun environment. When we relish the abundance in our lives and do something physical—such as social gatherings or exercise—we become fully open to the beauty of “now” since we are using every aspect of our being to engage completely in our lives. The more we are present in our lives, the more our negative thoughts and feelings fall by the wayside and instead are replaced by a shared sense of joy at being able to take pleasure in our present lives. By sharing your enjoyment of life today, you and your loved ones will begin to awaken to the full power and wonder of each moment.

THRILL OF THE NEW: A GOOD FORECAST FROM DAILY OM

You could hear news about something that piques your curiosity today and makes you feel thrilled. Perhaps things have been routine in your life recently, and the anticipation of engaging in something different animates you. Grabbing hold of the new ideas and opportunities that come your way might infuse your life with a sense that there is uncharted territory either in your work, personal, or spiritual life that awaits exploration. Remember that keeping your mind open to whatever you hear about can make you more receptive to the differing ideas and news that come your way today. As you let yourself relish the pleasure that comes from discovering something unusual you might notice that your take on life not only becomes more animated but that you also feel a greater sense of joy at the unexpected twists and turns that life brings your way.

Opening ourselves up to the things that surprise and thrill us makes us more ready to accept the unpredictable. For many of us it is easy to become comfortable with our habits and the ordinariness of our everyday existence. Allowing ourselves to seek the new and to be more responsive to the out-of-the-ordinary events that come along, however, better prepares us for the changes that life brings our way. There is really only one thing that is certain in life—things will always change. By embracing the new today, you will add greater excitement to your life that will nourish you and help you grow.

Posted by Eleanor Traubman at Friday, October 23, 2009 No comments: Links to this post 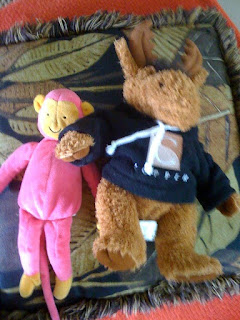 Unbeknownst to my brother and his wife, their 4.5-year0ld son Tyler took their digital camera and did an entire photo shoot of his stuffed animals. Pictured left are Pink Monkey (a gift from me) and Sweater-Clad Bunny.

When I went to visit Tyler almost a year ago, he kept staging and then taking photos of people and of his toys - legos, etc.

I liked that he got how you "frame" a picture and then take it. Taking charge as an artist - something I full-heartedly support in a young person!
Posted by Eleanor Traubman at Monday, October 19, 2009 1 comment: Links to this post 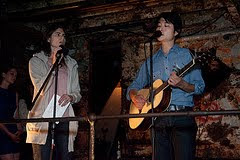 Underwater New York, an online anthology of stories inspired by objects found underwater around New York City, launched Wednesday with a party aboard the Lightship Frying Pan, which was once underwater itself. Underwater New York took over the rusty, barnacled boat with an evening of performances, including a reading by Ben Greenman, sketch comedy by Alex Scordelis and Chris Schell of the Upright Citizens Brigade Theatre, art by Mary Mattingly and Nura Qureshi, musical performances by Supergood! and Lawrence Kim & His Boss, and Michael Hearst Underwater: a Songs for (Underwater) Ice Cream Trucks installation. Nautical music was spun by DJ Dan Selzer, who also made an audio montage of authors reading excerpts from fiction written for the project, which was played into one of The Frying Pan’s creaky cabins. Underwater New York is looking for more stories inspired by their crazy, evocative list of underwater objects, from the whimsical (mysterious goo, runaway giraffe, a fleet of ice cream trucks) to the historical (Coney Island Dreamland, The Princess Anne Steamship) – visit the Underwater New York site to read the full list, sign up for notification of future events and excursions, see the amazing stories created so far for the project, and get inspired to create your own!
Posted by Eleanor Traubman at Friday, October 09, 2009 No comments: Links to this post 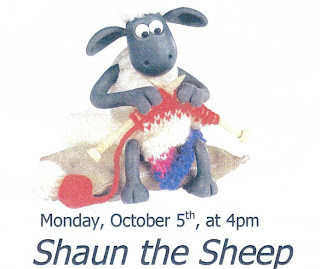 On Monday, I met my friend Melissa (a/k/a Hip Slope Mama) and her family at Cobble Hill Cinemas to see the one-hour movie Shaun the Sheep.

CH Cinemas did a great job of publicizing this event; there were fliers posted in all the newspaper self-serve boxes in the area.

Shaun is a character from Wallace and Gromit
movies, and you can't help but fall in love with the little guy.

Brilliant that they created a bunch of little short stories with Shaun and his sheep pals and formed them into this hour-long fiesta.

Shaun is "a lamb with a plan who never follows the flock. Curious, resourceful and fun-loving, Shaun's mix of enthusiasm and inexperience is often a recipe for trouble."

There were two scenes from the shorts that I particularly loved. One was when the sheep flock, to avoid getting sheared un-artistically by their owner, dug a hole that led out to a poodle-grooming store. They go into the store and come out with spectacular lamb-dos, including a blue mohawk and cornrows secured at the ends with rainbow-colored beads.

The second scene was when the lamb-watcher dude (think Otto from The Simpsons) turns his transistor radio to a rock station while minding the flock. The sheep break out into dance, form a mosh pit, and do body rolls.

I came home with rave reviews and Mike promptly ordered a bunch of Sean DVDs from Netflix.I also signed up for the Sean Newsletter.

Sean, can I be President of your Fan Club?
Posted by Eleanor Traubman at Wednesday, October 07, 2009 No comments: Links to this post

Email ThisBlogThis!Share to TwitterShare to FacebookShare to Pinterest
Labels: Sean, Wallace and Gromit 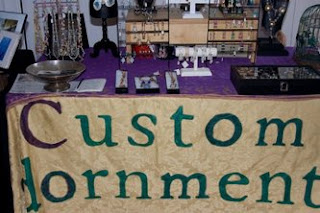 CALLING ALL ARTISTS, DIY-ERS CREATORS!!
Visit our 'JOIN US' section to join our next event!!

If you are an artist who is looking to join a community that will help you gain exposure, as well as network you with other artists - then please do not hesitate to join us. Simply register for space ['JOIN US' section] - and we will contact you as soon as possible with a confirmation. Cash payment will be due upon your arrival on the day of event.