SCHULMAN AND HAMMERSTEIN: A GREAT "DOUBLE-HEADER" AT LINCOLN CENTER

After vowing to get myself to Lincoln Center more often this year, I traveled up there a few weeks ago for a great double-header.

First, I went to the NYPL Library for the Performing Arts to listen to Susan L. Schulman tell stories that formed the basis of her book Backstage Pass to Broadway: True Tales from a Theatre Press Agent.

When that event ended, I ran down the street to hear Oscar Hammerstein's grandson, Andy, present the history of his grandfather's music.

Ms. Schulman, a long-time press agent, started out by telling about her life growing up in New York.  She took dance lessons, went ice skating, and frequented both the library and the 92nd Street Y.  A self-described "theatre kid," Ms. Schulman would wait outside the stage door at the end of productions - not to get autographs, but to let actors know how much she enjoyed their performances.

In 1978, Susan opened up Schulman Publicity in the Paramount building. Over the span of her career, Susan  has worked with theatre figures such as Lauren Bacall, Zero Mostel, Mary Martin, George C. Scott, and Yul Brynner. She explained that it's the job of a press agent to "create the right expectations for critics and audiences."

Ms. Schulman recalled with fondness her encounters with famed choreographer Bob Fosse. She described him as someone who valued critics' feedback, "knew everything about everything," and was "the master of every single theatrical discipline."

At the end of her talk, Susan took questions from the audience.  A few folks wanted to know the impact of social media on how she approached her job.  I asked her for her thoughts on how to develop young audiences for theater.  She mentioned the late playwright Wendy Wasserstein's work as a co-foundre of Open Doors Broadway Mentors Program.

After Ms. Schulman signed a copy of her book for me,  I ran down the street to the David Rubenstein Atrium to see Something Wonderful: The Songs of Rodgers and Hammerstein.  Andy Hammerstein talked and showed slides about the history of his grandfather Oscar's work.  His anecdotes were brought to life by three talented singers.

Andy described Oscar as a "lefty with a lower case 'l'" who, like many [Jewish] artists of his times, was brought under the magnifying glass of McCarthyism and made the subject of an enormous FBI file.

One of the highlights of the event was joining the rest of the audience to sing "Do Re Mi" from The Sound of Music.  Truthfully, there were so many wonderful songs, I wish the entire evening had been a sing-a-long!

NOT TO BE MISSED: BILLY PORTER AND CYNDI LAUPER AT LINCOLN CENTER ON WEDNESDAY, JAN. 28!


Billy Porter, the star of Kinky Boots, will be performing at Lincoln Center this coming Wednesday, January 28.  He will be joined by the one and only Cyndi Lauper.

Tickets can be purchased HERE. 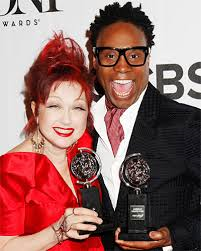 Posted by Eleanor Traubman at Friday, January 23, 2015 No comments: Links to this post

DANCER ON THE SUBWAY 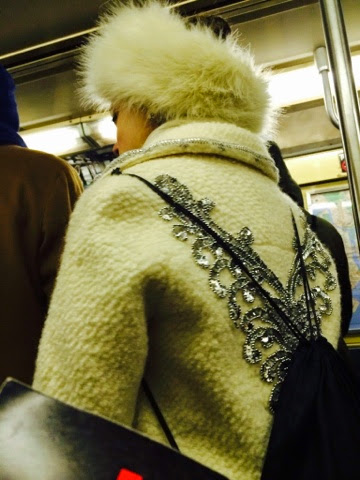 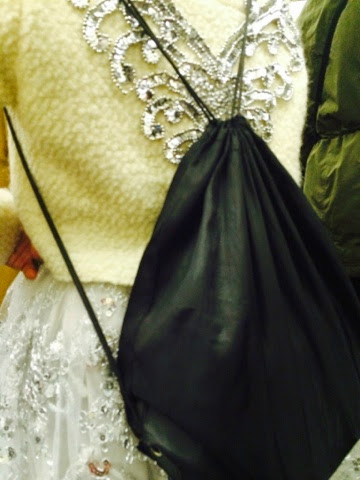 Tonight, this dancer on the subway still had her costume on.  It was sparkly and magical.  Looking closely, I could see that underneath the top layer of netting in her skirt, there was a a string of lights like those found on a Christmas tree.  How pretty that must have looked up on stage when lit up!
Posted by Eleanor Traubman at Monday, January 05, 2015 No comments: Links to this post 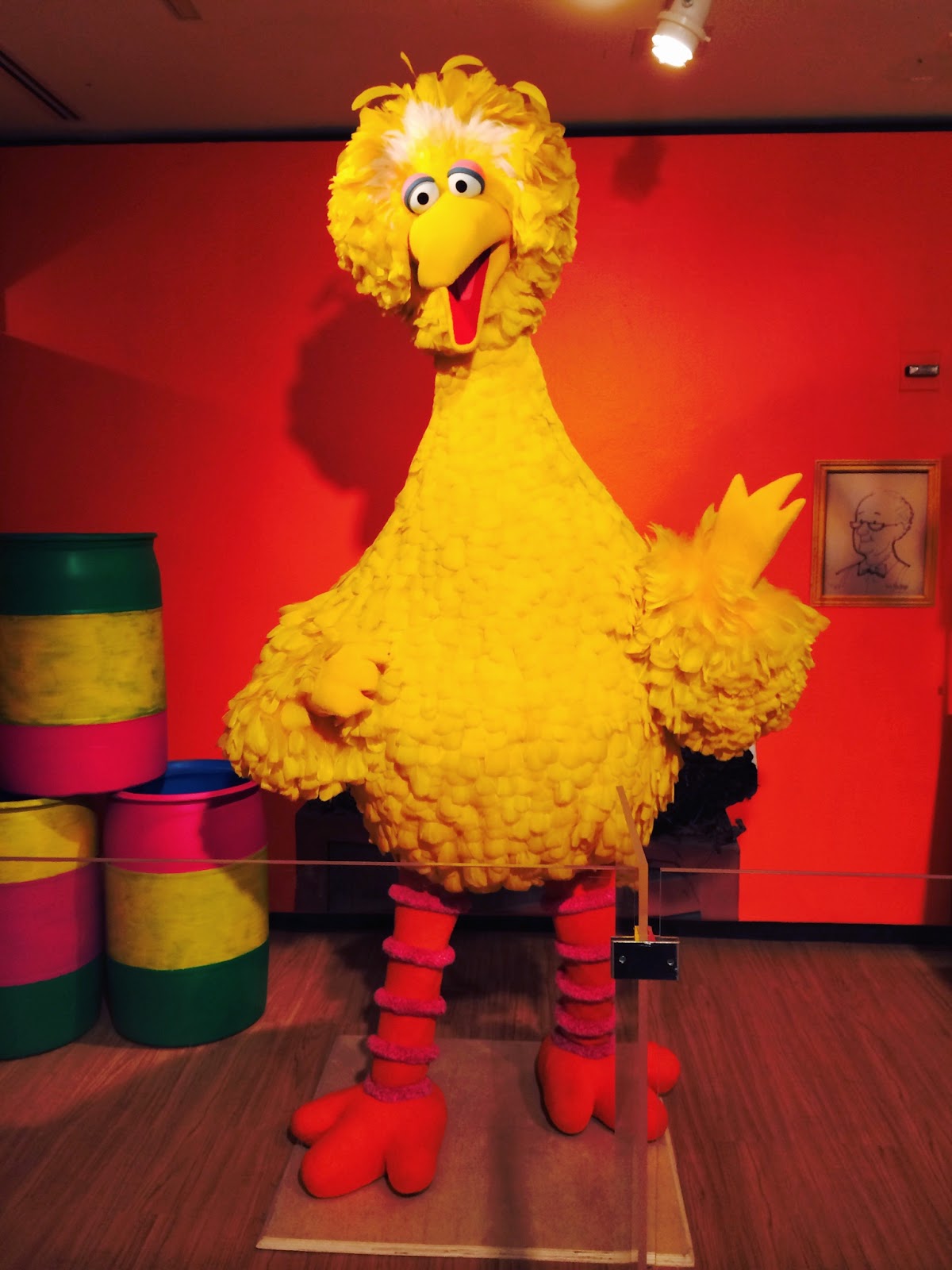 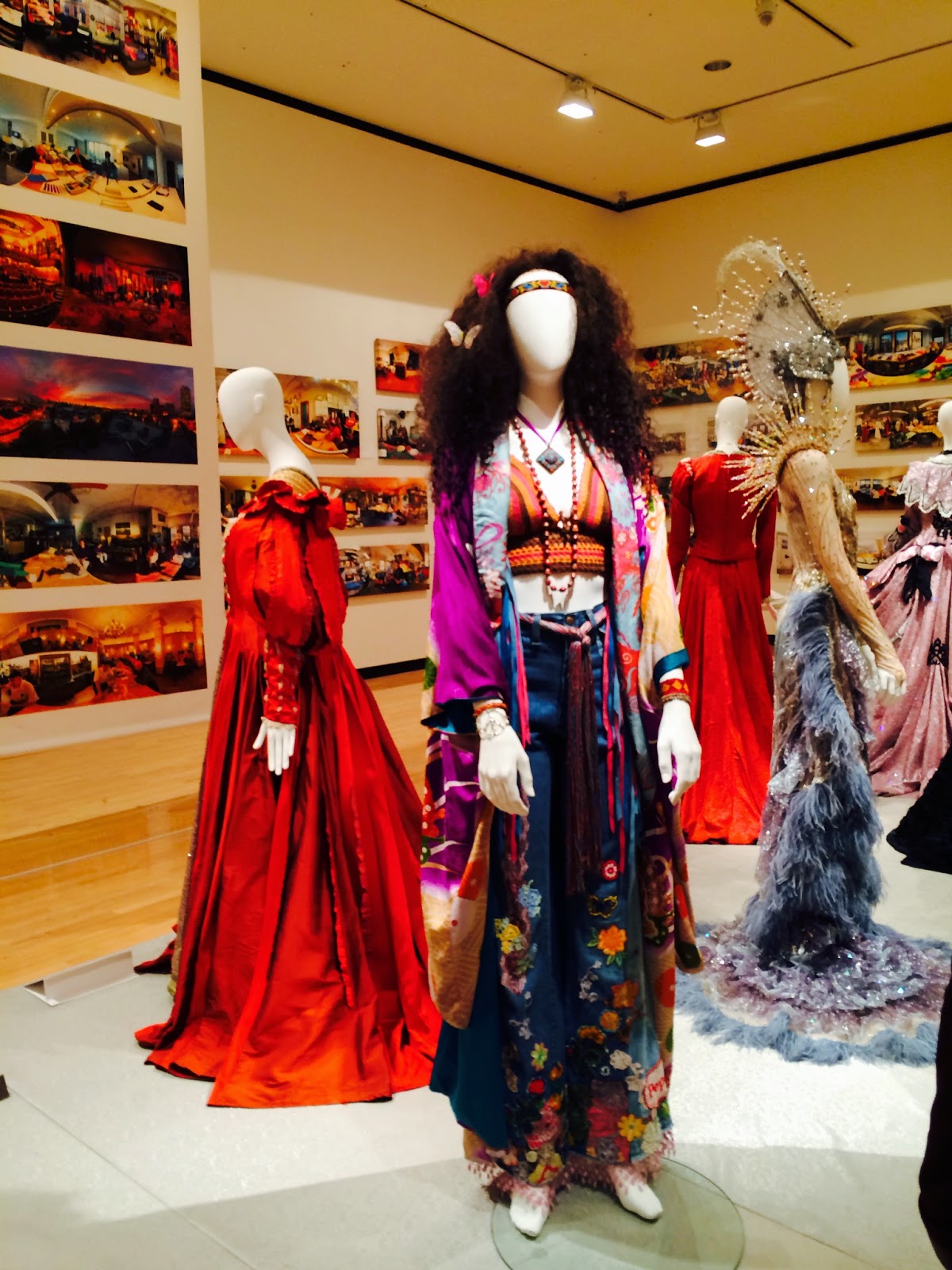 I feel  incredibly lucky to live in a place that is so rich in opportunities to engage with and celebrate the arts.  This year, I am committed to getting out and taking advantage of more of these opportunities.

Specifically, I want to see more performances, go to exhibits, watch more DVDs, read more books, and talk to people in the arena of my first true love, the performing arts.

So I started 2015 by going to the New York Public Library for the Performing Arts to see "Somebody Come and Play:" 45 Years of Sesame Street Helping Kids Grow Smarter, Stronger, and Kinder.


The exhibit, conceived by Sesame Workshop archivist Susan Tofte, features Sesame Muppets, archival footage, scripts, storyboards, lead sheets, designs, and scores from the archives of the show.  There is also behind the scenes footage, animation cels, photographs, blueprints, and an architectural model of the set from the early 90’s. There's lots of nice opportunities to view show highlights, including a  look back at many of the celebrities and other notable people that have visited Sesame Street.

I sat down for quite a while on a tiny wooden bench with some 70s-style headphones to watch some of the archival footage.  I was fascinated by the clips from from the brainstorming sessions of the folks who conceptualized the show before it ever went on air.  I got teary-eyed as I listened to the cast explain to Big Bird that his dear friend Mr. Hooper had passed away and would not be coming back.
Also sweet was the episode where Luis and Maria get married.

Looking around at all the families passing through, and being reminded that Sesame is in 150 countries around the world, I could really feel and see  the impact that this show has had on the lives of millions of people around the globe.

After spending a few hours at the Sesame Street exhibit, I traveled to another part of the library and stumbled upon another exhibit.  This one was titled Broadway Revealed: Photographs by Stephen Joseph Behind the Theater Curtain.  In the center of the room were fantastic costumes from various musicals and plays.  How fun to see the bright red beauties (see photo above) from Kinky Boots standing proudly in a lucite display box.

On the walls surrounding the costumes wre photographs of all the people who work behind the scenes to make the magic that is Broadway.

In between visits to these two fab exhibits, I took time to explore the shelves of this branch of the NYPL dedicated entirely to the performing arts.  Such an exciting array of books, CDs, DVDs, and videos.  I checked out a book of essays by deceased playwright Wendy Wasserstein, as well as some DVDs from The Best of Soul Train collection.

I hope to extend that sense of inquiry and wonder into 2015, and make it integral to many of the adventures which I seek out this year.

Posted by Eleanor Traubman at Monday, January 05, 2015 No comments: Links to this post