THE PASSING OF A TRUE HERO, HANDY WITHERS 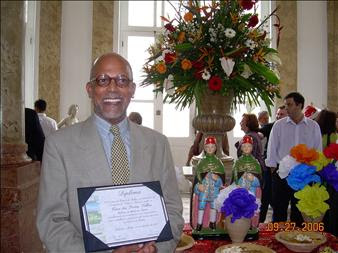 One of the first people I met while working at The Brooklyn Children's Museum was Handy Withers. Handy, on the board of the museum, was also a steady volunteer.
We partnered up in the mandatory FISH customer service training and found out that we both were arts lovers who liked to watch TV dance competitions and read New York Magazine. We often shared good conversation during our lunch break on the upper level of the museum and I teased him good-naturedly about the salt and pepper shakers he brought from home to season his food.
After I was affected by a round of layoffs in November, Handy sent me an email encouraging me to follow my passions. He said that a message to that affect was posted on a door of the hotel which he used to run in Brazil.
Yesterday, I learned over lunch with a former colleague at the Children's Museum that Handy had unexpectedly passed away earlier this year. I was in shock to learn this news. He was a vibrant, active man.
To get a sense of the lives that Handy affected, you can visit the guest book which his brother established for him.
Posted by Eleanor Traubman at Tuesday, July 20, 2010 No comments: Links to this post

MY FRIEND LISA INGRAM INSTALLS "ORACLE" ACROSS THE STREET FROM MOMA 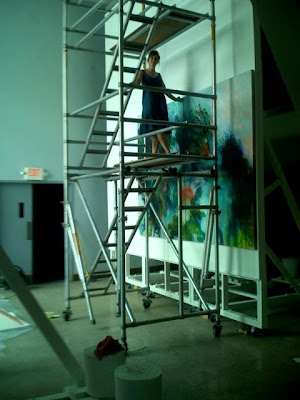 I had the privilege of hanging out with painter and friend Lisa Ingram while she installed "Oracle," a 3-panel painting now on exhibit in the Donnell Library Windows 24/7 until August 30, 2010.

The Donnell Library Windows are on 20 West 53rd Street across from the Museum of Modern Art.

Please go take a look at this amazing piece!
Posted by Eleanor Traubman at Tuesday, July 20, 2010 No comments: Links to this post 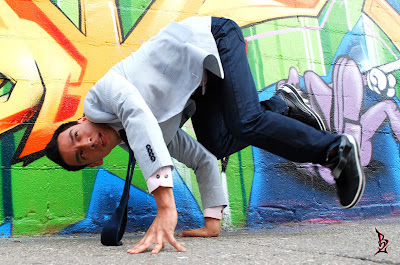 Had the best time EVER at Museum of Modern Art.

First, stopped by across the street from the MOMA where Donnell Library used to be. My friend Lisa Ingram was hanging her giant 3-panel painting in the window. (Photos to come....stay tuned.)

Next, had lunch at Cafe 2 at MOMA where I chatted with friend and Exec. Chef Lynn Bound. Also read a terrific NY Times article called Tweet Less, Kiss More. So far, this article has received 237 comments from readers!

Lynn introduced me to Carlos M. Silva (see photo above) - b-boy, artist, photographer and DJ.Carlos - a/k/a Bboy EcuAsian (he's part Chinese, part Ecuadorian) - got a few friends together to teach b-boying to children for free of charge. He also has his own Crew, Brooklyn Zoo. I'll be doing a more in-depth interview with Carlos down the road. He also gave me the okay to come watch one of his rehearsals.

After chatting with Carlos, I stayed on at the cafe to talk to a retired couple -both of them painters and one of them a native Brooklynite - about museums, how they met (they've been married for 62 years), and a whole lot more.

Finally, walked out to MOMA's sculpture garden to check out people's wishes that they had written out on cards and tied to The Wishing Tree. There were lots of great wishes for world peace but my favorite wishes were "To host SNL 16 times" and "An endless Slurpee drink."

MOMA was pure magic today.
Posted by Eleanor Traubman at Saturday, July 17, 2010 No comments: Links to this post

ORGANIZING TIP OF THE WEEK: USE "RAFT" TO PROCESS MAIL 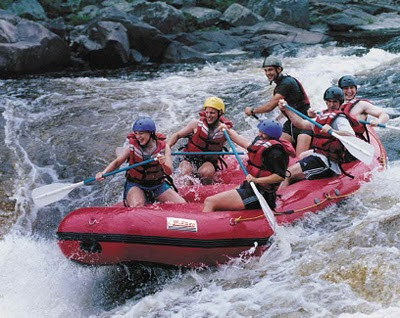 Go through mail daily. This prevents paper pile-up.
Use the RAFT acronym for dealing with incoming paper.
R = Refer it to someone else (your spouse, etc.).
A= Take action on it. Pay the bill, make the phone call.
F = File it.
T = Toss/Recycle it.

Want A Hand Getting Organized?

Eleanor will help you to:

• Set up desks & closets that you love to use

A professional organizer since 1999, Eleanor helps busy New York women de-clutter and make better use of desks, closets, filing systems, and more. She has been featured in The New York Times; Time Out New York; The Brooklyn Paper; Park Slope Parents; Family Circle; The Sun Times Chronicle; and Fitness. Eleanor is also an early childhood educator and an expert on play. She is Editor-In-Chief of Creative Times: A Blog for Artists & Entrepreneurs

Posted by Eleanor Traubman at Monday, July 12, 2010 No comments: Links to this post 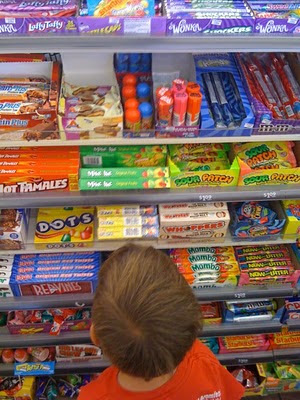 "Paradise is all in the eye of the beholder. According to T-Bone, it's the Cardiff 7-11."

Posted by Eleanor Traubman at Friday, July 09, 2010 No comments: Links to this post 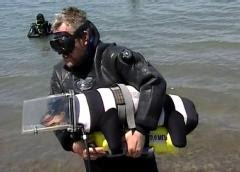 Click HERE to read a hilarious account of how a guy taught a dachsunds how to scuba dive.
Posted by Eleanor Traubman at Tuesday, July 06, 2010 No comments: Links to this post

Van Vader did a great job of DJing The Brooklyn Blogfest this year.

Turns out, he's a civic-minded guy, too. VV is getting ready to lead a group of young people to New Orleans for a community service project.

He recommends goint to events thrown by KeiStar Productions, saying "They do a Michael Jackson tribute, a MJ vs Prince party, and the most incredible party of all - a Stevie Wonder tribute. I promise you, mixed crowd, dancing all night, fantastic music (wish I had thought of these parties!)..."

Here is VV's bio, taken directly from his website.

As a High School senior, Van Vader began dabbling in the art of djing. On his brother King Khan's tables, his love for music and mixing grew as he quietly acquired the skills necessary to rock a party. As a freshmen at Wesleyan University, "DJ Vader" (as he called himself) and his partner Cazual Phil landed a radio show on 88.1 FM, WESU Middletown. For four years, the pair was known for "randomidity" - a phrase they coined to describe a show where "you never knew what to expect." The show was extremely successful, broadcasting all over Connecticut, and Vader's style of catching listeners unawares was born. DJ Vader's first opportunity to hold down a party presented itself during his freshman year.

While attending a Trinity College Halloween party his brother was spinning, Vader was given his first light. A fifteen-minute spot proved to be all that was necessary to get the party jumping. The crowd response was unbelievable, and the prodigy was hooked on his new art form.
In the years following, Vader purchased his own equipment and began spinning on campuses all over New England. During school vacations, the DJ would find himself booked for clubs in the city, such as Demerara's and Kingdom Hall.

As his repertoire expanded and his skills grew, so did his following and his name. Now "Van Vader" (thanks, Ash-Man), he was ready to take on the world from behind his tables. Upon graduation, however, the demands of a full-time job did not leave much room for music, and the young DJ sought refuge spinning select major events. After doing the Christmas party of for Scharmann's lounge, Van Vader was asked to spin regularly in the popular spot's Soho locale. This was a huge success and regulars would gather weekly to listen to live music while enjoying a drink or dinner. The lounge feel was perfect for the Soho clientele and Van Vader's fanbase grew tremendously. On a nightly basis, the DJ would receive words of thanks, praise, and curiosity: "Why don't you come out to London?" "I have never heard a DJ in Miami play like you - when are you coming down?" People from Germany, Spain, Atlanta, California, indeed all over the world requested an appearance.

Previously isolated to the New York/New England areas, the global demand for a DJ of his talent was overwhelming. Thus, Van Vader was reborn. Now, Van Vader's dreams and the requests of his faithful supporters will reached. When asked how he rated himself in comparison to other DJ's, the young man replied, "All I know is that I have been blessed with a gift - for reaching people. If it's now through music, then so be it. People feel my music, and I feel the responsibility to never let them down." Prepare to be reached . . ...

Posted by Eleanor Traubman at Saturday, July 03, 2010 No comments: Links to this post

READY TO KICK CLUTTER'S A**? 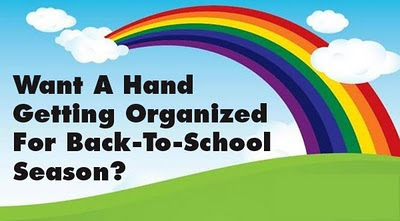 Want A Hand Getting Organized For Back-To-School Season?

• Set up desks & closets that you love to use

Ready to get the organizing ball rolling?

A professional organizer since 1999, Eleanor helps busy Brooklyn moms de-clutter and make better use of desks, closets, filing systems, and more. She has been featured in The New York Times; Time Out New York; The Brooklyn Paper; Family Circle; The Sun Times Chronicle; and Fitness. Eleanor is also an early childhood educator and an expert on play. She is Editor-In-Chief of Creative Times: A Blog for Artists & Entrepreneurs.
Posted by Eleanor Traubman at Saturday, July 03, 2010 No comments: Links to this post