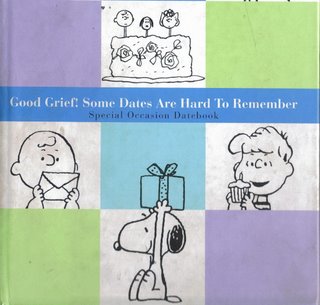 Stop feeling bad about missing peoples' birthdays and instead take charge with a birthday book, also known as a perpetual calendar. That's what I did in 1997 when I bought the fabulous Good Grief! Some Dates Are Hard to Remember Special Occasion Datebook. The illustrations are based on the PEANUTS comic strip by Charles M. Schulz.The book is spiral-bound and divided by tabs into the 12 months of the year. Each day of the year has half a dozen lines for you to record anniversaries, birthdays, and other occasions which celebrate the lives of the people you love and care about. A few days before the start of each month, I review whose birthday or anniversary is coming up. I pull together greeting cards and get to work. It's easier to just send them out in a batch.

I dedicate the single drawer of my desk to my birthday book, stamps, return address labels, stickers, and stationery. So sending notes to people on any occasion is fun and easy. It's so satisfying to hand a stack of crisp white envelopes to the mail carrier.

Go to it! Go get a birthday book!
Posted by Eleanor Traubman at Friday, August 18, 2006 1 comment: Links to this post 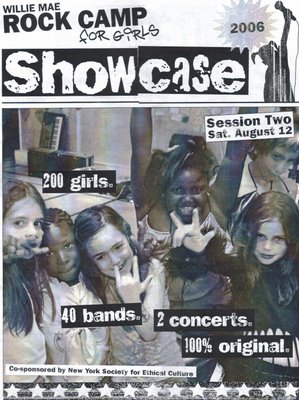 Jack Black rocked hard in School of Rock, but the girls in his movie only got to be backup singers. Not the girls from last Saturday night. Front and center at a school theater, they occupied big space with big voices, big gestures and big lovin' energy from their fans in the audience. They were the girls of Willie Mae Rock Camp for Girls and they took no prisoners.

In the course of a single week, 200 campers formed 19 bands with names like Barbie's Rejects, Chicks with Sticks, Ripchord, and The Corrupted Frenchfries. They learned how to play musical instruments, write songs, work a soundboard and a turntable, direct music videos and learn about salsa, hip-hop, blues, reggae, jazz, and punk rock.

The camp, which originated out in Oregon, is named after Willie Mae "Big Mama" Thornton, a blues and rock performer/songwriter who was one of the first women to play the music that came to be known as "rock n' roll." "Big Mama" would definitely be proud of these girls.

Here are the lyrics to my favorite song of the evening:

Explosion 99
by The Corrupted French Fries

Bow down to us
And go without a fuss
We will take control
And mastermind patrol
We're takin' over the world
And ya betta not hurl
Yeah! We'll dominate the world

We just want to create
A place that we could dominate
Dominate! Dominate!

We rock really hard
And we are so in charge
We'll take over the universe
Universe! Universe!

For betta or for worse
Yeah! We'll dominate the world

When the postman handed me certified mail from the New York Public Library, the first thing I thought was "Holy Schneikies! Do I owe that much in overdue fines?" After signing for it, I tore open the envelope and read a letter informing me that I had won a prize in the 2006 Dream Raffle. Accompanying the letter was a gift certificate for Cascina Ristorante, a restaurant in New York's Theatre District. Well, Glory Be!

When I entered the Dream Raffle earlier this year, I cut out pictures of the two prizes I most wanted to win - the Caribbean Odyssey and a trip to the New Age Health Spa - and put those pics in my Dream Binder. I didn't win those prizes, but I'm still grateful to the NYPL for giving me this chance to take my man out for what I'm sure will be a delightful supper.
Posted by Eleanor Traubman at Saturday, August 12, 2006 No comments: Links to this post

BIRTHDAY TRIBUTE TO MY DAD 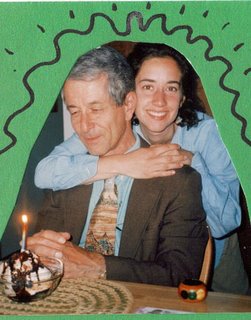 In honor of my Dad, Len Traubman, on his birthday, I am documenting some of my best memories of him from the first ten years of my life, plus some interesting facts about him.

* Let me and my brother, when we were about 5 and 3, sing "bathroom language" words while he played on the guitar. I don't think I had ever laughed that hard. (And may I say what a smart parenting strategy that was?!)

* Hung out with me at a San Francisco public school playground to help me learn how to ride a two-wheeler bike.

* Took me, as a surprise, to get my ears pierced on my 7th birthday.

* Squeezed one eye shut, puffed out his cheeks, and talked like a pirate, sending my brother and me into rolling fits of laughter.

* Drove our whole family waaaaaaay out into the boondocks to visit the "redhead babies" of one of his patients. The "redhead babies" turned out to be a whole batch of redhead baby dachsunds and we got to pick one out to take home with us. We named her Suena, which means dream or vision in Spanish.

* Left $20 by bed so I would wake up and find it the morning of my 5th grade graduation trip to Six Flags Marine World.

* Showed me how to pass a baton and timed my laps to help me prepare for a elementary school track meet.

* Took me to see Yul Brynner in the live theater production of The King and I.

* Took me, starting from age 2, to Tadich Grill, the oldest restaurant in San Francisco.

* Took me to the deli of a large downtown grocery store to pick out a whole cow brain to study and bring to my 5th grade oral presentation about the brain.

* Taught me and my brother how to make fried matzoh.

Some Interesting Facts About My Dad

* He knows how to make beautiful jewelry out of different metals.

* From his many years as a children's dentist, he has an enormous collection of fun ties which feature bright colors and characters.

* He once dressed as Waldo (as in Where's Waldo?) for his office's Halloween party, and designed his own costume.

* A pro at geneology, my dad wrote a book about his side of the family. He also knows a ton about my mom's side of the family, and stood up at his mother-in-law's funeral service to share interesting stories about her family's history.

* He assembled a ham radio when he was around the age of 10 and can still do a rapid verbal fireout of the morse code (which cracks up his 8-year-old grandson).

* He can play Grandma's Feather Bed, Froggy Went A-Courtin', and many other country and folk songs, on the guitar.

Thanks, Dad, for modeling kindness, curiosity, vision, patience, humor, and appreciation of the arts.