THE BAKER'S DOZEN: SOME OF THE MOST-VISITED POSTS IN CREATIVE TIMES HISTORY

Posted by Eleanor Traubman at Friday, May 10, 2013 No comments: Links to this post 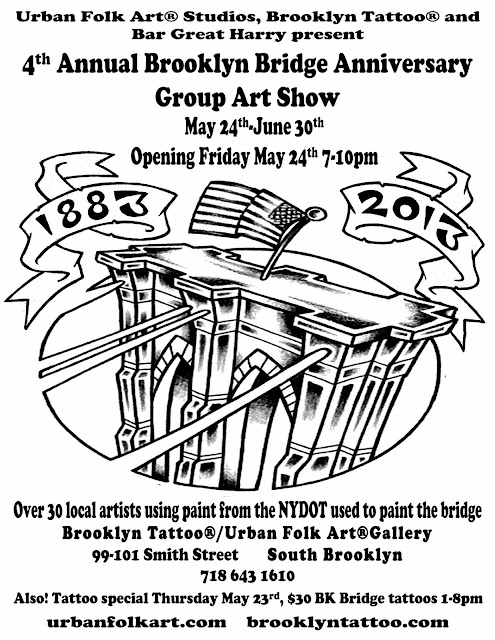 Urban Folk Art® Gallery will be honoring the 130th anniversary of the opening of the Brooklyn Bridge with a group show of over 30 local artists of varying mediums. In their fourth show of this type, artists will be showing their homages to the bridge with one common element. In February 2013, curator and contributing artist Adam Suerte acquired five 5 gallon buckets of surplus paint from the NY Department of Transit that was used to do touch ups on the Brooklyn Bridge (http://cityroom.blogs.nytimes.com/2013/02/05/surplus-paint-from-the-brooklyn-bridge-now-could-be-yours/). Each artist in the group show will be using the
“Chocolate Brown Enamel” in some way within their piece. Painters, comic artists, graphic designers, photographers, screen printers, tattooers, graffiti artists, toy designers and artists of other mediums will be contributing. Suerte, as one of his pieces has repackaged some of this paint in a limited edition quart size cans that will be for sale at the show. If you ever wanted to own a piece of the bridge, this could be considered pretty close.

The show opens May 24th from 7-10 and will remain up until the end of June.

Brooklyn Tattoo® has been operating in South Brooklyn for over 10 years, and the Urban Folk Art© collective was founded in 1991 and has been curating artshows for as long. The gallery was opened in January 2011, they exhibit various genres of work from contemporary painting, drawing, illustration, printmaking and photography, legendary graffiti artists to comic art. The gallery shows a range of undiscovered, emerging, and established artists. The collective’s belief is that the cross marketing of each other and the gallery as a whole as a mutually supportive resource is a valuable way for emerging artists to gain a wider audience for it’s members, the group, and the artists the gallery supports.

Posted by Eleanor Traubman at Monday, May 06, 2013 No comments: Links to this post