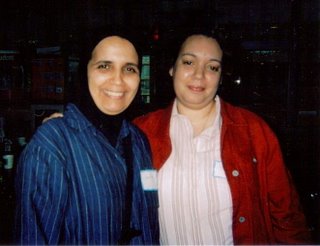 I met Halima (left) and Rachida (right) in 2005 when I trained them and other parents at Roosevelt Island’s Public School 217 to be volunteers in the school. I remember thinking at the time how they defied every crummy stereotype about Muslim women. They were funny, open, outspoken, and asked good questions. They shared from personal experiences of coming to the US, learning English, and navigating our culture. Through their talk, I learned that Halima and Rachida shared a strong friendship.

When I returned to PS 217 in the spring of 2006 to lead a workshop about parenting adolescents, Halima and Rachida came into the room together to participate. “Do you want any treats before you sit down?” I asked. There were coffee and sweet rolls on a nearby table. “No thanks,” they replied, “we just had breakfast together.” Something about that response caught my attention, maybe the fact that two friends started the day by sharing a meal. You don’t hear a lot of stories about moms, or anyone, doing that. I pried a bit and found out that Halima and Rachida’s breakfast together is a near-daily event. At 8:30 a.m., they drop off their children at school and head to Trellis, the only sit-down restaurant on Roosevelt Island.

The following month, after the school held a Volunteer Appreciation Breakfast, I pulled Halima and Rachida aside and asked if I could interview them for Creative Times. “Sure,” they said. And this is what they shared:

Halima came to the U.S. in 1995 and Rachida came in 2002. They met here at a children’s birthday party. They are both Moroccan, both Muslim, and both speak French, all commonalities which contributed to the original connection they made at the celebration. They also both shared a focus on education when it came to raising their young ones.

At the party, the two women exchanged information and continued to build their friendship in different ways. Before Rachida knew a lot of English, for example, Halima would do some translation for her at doctor appointments.

“What do you like about each other?” I asked them.

Halima’s reply: “Rachida is funny, sensitive, and she is a good mom.”
Rachida’s reply: “Halima is open-minded, sincere, and confident in the information she shares about parenting.”

Halima and Rachida’s families get together sometimes, but it is their morning breakfasts that are the bedrock of their friendship. “The breakfasts last hours sometimes,” they share, “and the time goes by quickly.”

PS – Halima is now the PTA President at PS 217. Rachida is teaching French at the United Nations International School.
Posted by Eleanor Traubman at Saturday, September 30, 2006 No comments: Links to this post 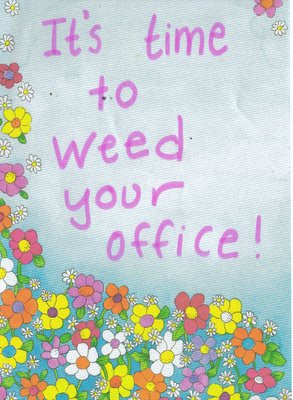 When I was a full-time professional organizer, I saw a lot of folks whose file cabinets were stuffed with papers that they never looked at or used. Meanwhile, the papers that came in everyday - bills, school stuff, medical stuff, stuff related to work, passionate pursuits, and daily life – piled up on desks, beds, window sills and bookshelves. Yikes!

An office is a lot like a garden: You’ve got to weed it to keep it in good shape. Remove whatever is excess, old, no longer relevant, and you’ve got yourself more room – physical and mental – to grow beautiful, new ideas, projects, and relationships.

At least three times a year, I go through all my files. I take out one file at a time, look at the contents, and ask myself if they are truly important to my life right now. If a single paper or an entire file doesn't fit that bill, into recycling it goes.

Sometimes, I create whole new categories of files based on a life change or on a new priority. I have one now called Brooklyn Life. It includes folders called Home Ideas, Park Slope Food Coop, and Goals.

The idea of going through your files may sound like a complete drag. But let me tell you, there are some rewarding and even pleasurable aspects to it. For me, it’s like taking an inventory of my life, past and present. I get to take a walk down memory lane and then figure out which of these memories are worth preserving. Sometimes I come across papers that remind me of something I want to write about, some idea I want to pursue. Or I realize that whatever that paper represents is no longer important to me in my life right now.

When I’m done with the whole process (which, by the way, is easier if broken up into one- or two-hour chunks of time over the course of a weekend), my file system is easier to use. It’s more reflective of how my life actually is. I have the immense satisfaction of recycling one or two large bags of paper. My office has a whole new, shiny, light look and feel.

If you have an office inside or outside the home, enter it with the discerning eye of a gardener. Pluck out what hinders growth, make room for the new.
Posted by Eleanor Traubman at Friday, September 29, 2006 No comments: Links to this post 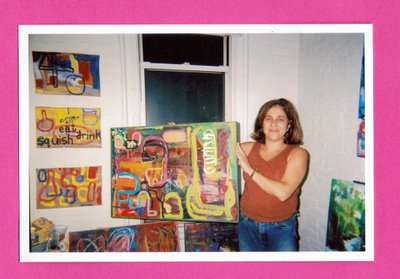 I met Cecilia Andre through a women's organization called The Crystal Quilt. She came to my apartment on the night that I led an evening of goal-setting for a group of Crystal Quilt women, and afterward sent me a thank you note featuring animal stickers surrounded by her own sketches. I was intrigued.

Later, Cecilia showed up when I trained a group of parents at her daughter's school to be Learning Leaders - that is, to provide one-on-one assistance to public school students who needed extra help with math, reading, and writing. Cecilia agreed to be the Lead Volunteer of Learning Leaders at the school, and proceeded to help lead one of the most dynamic and well-organized group of parent and community volunteers that the school has ever seen. Going above and beyond her weekly duties as a tutor, Cecilia organized other volunteers and school staff to turn a dumpy, depressing teacher lounge into a chic, comfortable hang-out spot via donations of paint, furniture, window treatments and her very own artwork.

Which brings me to Cecilia, the artist. Cecilia has been making art since she was a young person growing up in Brazil. Currently, she has her own studio in the Upper East Side of Manhattan. There, she paints, hosts small studio classes and throws parties. She shows her work in locations around the city and is excited about the upcoming Painting is a Dinosaur. The show will run from Oct.4 to Oct.29 at Gallery Onetwentyeight. Go to 128 Rivington Street between Essex and Norfolk. Take the F Train to Delancey and you'll be on the corner of Essex, just one block away from the gallery. Hours: Wed. - Sat. 1:00 - 7:00; Sunday 1:00 - 5:00. Cecilia will be there each Sunday.

Here's what I love about Cecilia:

She so warmly invites people of all walks of life into her own life and into her family's life. As a result, Cecilia's life is rich with a diverse array of friends and her children get to grow up in an extended network of people who care about them.

As an artist, mom, and a leader, Cecilia powerfully models for her daughters and for other females that there are no limits for women. She prioritizes the well-being of her family without losing sight of her many additional interests and talents. Case in point: she has kept her identity and work as an artist front and center.

Cecilia is as busy as anyone else I know, yet leaves room in her life and her family's life for spontaneity and unstructured time. There is a sense of generosity there and a sense of playfulness in how she views and lives in time.

Thanks, Cecilia, for modeling what it means to live life fully and passionately!

To contact Cecilia about her artwork or studio classes, email: arteny@msn.com or phone: (917) 892-6705
Posted by Eleanor Traubman at Friday, September 22, 2006 No comments: Links to this post 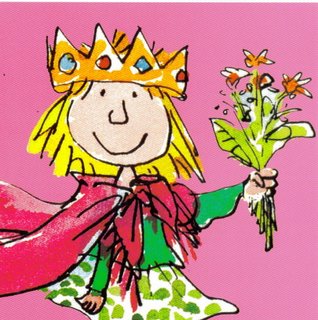 I'd read and heard about keeping a gratitude journal and wrote it off as being corny. The thing is, I have a little habit of focusing on "problems" rather than giving my attention to what's going well in life. So I finally started to keep a gratitude journal, first in an actual paper journal and then in a computer file. At the end of each day, I list ten simple things that I feel grateful for. It's a great way to end the day and gets my attention on what's going well.

Here's one of my lists: 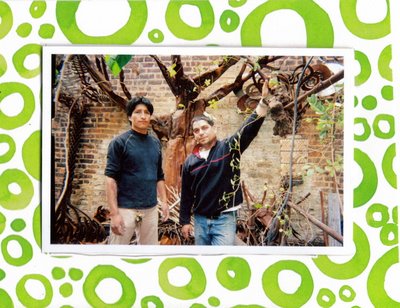 If I could spend the night anywhere besides my apartment, it would be in the garden seating area of Le Petit Cafe. Just push a couple of tables aside, pop up an Aerobed, and I would be in Heaven. You might be, too. Co-owners Jose Segundo (left) and Tommy Perez (right) have created one of the most magical environments in Brooklyn. Prior to opening Le Petit in 1999, Tommy had spent a good deal of time at Connecticut Muffins. He noticed how much he enjoyed being outside with his neighbors and decided to create a place of his own where local residents could hang out together. A few years after opening his restaurant, Tommy brought Jose on board and eventually made him Co-Owner. You can tell by the good vibe in Le P. that these guys work well as a team.

Le Petit boasts these features: skylight; soothing sounds of two waterfalls; pleasant wait staff; stone floor; and two tree-shaped tree sculptures made of sheet metal, one which pours water the other which holds votive candles. Everywhere you look, there is something pleasing to the eye - a color, a texture, a small sculpture or plant. Still, it never feels overdone.

Whenever I need time away from the hustle and cement of the city, I head off to Le Petit. An hour of reading, writing, eating, and soaking in the beauty fills me with the quiet inspiration I need.

Le Petit is located at 502 Court Street between Luquer and Nelson. You can get there by taking the F or G train to Carroll Street. Their website is http://www.lepetitcafe.us/
Posted by Eleanor Traubman at Thursday, September 07, 2006 1 comment: Links to this post