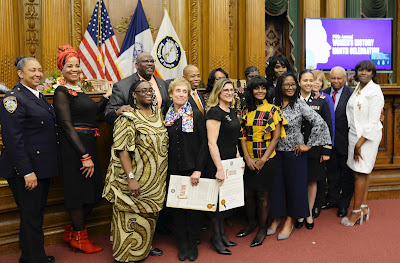 It was standing room-only at the Fifth Annual Women's History Month Celebration at Borough Hall.  The March 29 event, organized by The Office of The Brooklyn Borough President, honored women "[...] who are committed to public service and giving back to their communities."

During the opening remarks, Mr. Ronald Law, Head of Government Relations for MetroPlus Health Plan, spoke about the power of a dream not deferred in reference to Bessie Coleman.  Ms. Coleman, he explained,  was the first woman of African-American descent and the first of Native American descent, to hold a pilot license.  The USPS dedicated a stamp to her memory, and when she died in a plane crash, 15,000 people attended her funeral.

Before announcing each award recipient, Borough President Eric L. Adams spoke about the universal oppression and exploitation of women throughout history, challenging the tenets of global sexism and male domination.

To learn more about activities and programs at The Office of the Brooklyn Borough President:
http://www.brooklyn-usa.org/
https://www.facebook.com/BPEricAdams/
To sign up for the Borough President's Mailing List:

http://www.brooklyn-usa.org/sign-up-2/
Posted by Eleanor Traubman at Friday, April 13, 2018 No comments: Links to this post