I CAN'T WAIT TO READ LEE KRASNER: A BIOGRAPHY 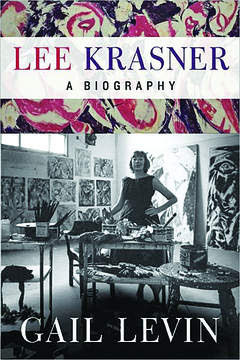 I remember being at The Brooklyn Museum a bunch of years back, seeing some of the paintings of Lee Krasner, and thinking "Damn, this was a brilliant woman. I wish I knew more about her!" So I was thrilled to find out that there's a biography out about her, written by Gail Levin. Mary Houlihan of the Chicago Sun Times starts her review of the book this way:

For decades, the defining footnote to Krasner’s life was her marriage to legendary artist Jackson Pollock, a long-suffering relationship that overshadowed Krasner’s own talent and contributions to American abstract expressionism. But now in the absorbing Lee Krasner: A Biography, art historian Gail Levin looks well beyond the Pollock factor to detail Krasner’s own brilliant career. She manages to do this in succinct detail stretching from Krasner’s Brooklyn childhood and involvement in the early 20th century New York art world to the decades after Pollock’s death and the eventual recognition of her own artwork.

Posted by Eleanor Traubman at Sunday, March 27, 2011 No comments: Links to this post

SEE YOU THIS SUNDAY AT 4 PM AT MMMM...I WANT TO EAT THAT ART! 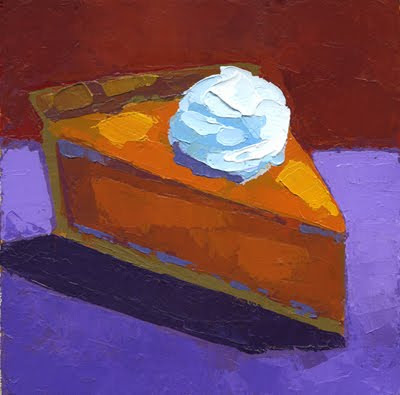 I am psyched to announce that the pie paintings of Mike Sorgatz, my husband and curator of Art In Brooklyn, will be featured in MMmm...I Want to Eat That Art.

Hope to see you there! Here's the info:


MMmm...I Want to Eat that Art


On view at Corridor Gallery from March 25th to May 21st 2011 is a collection of delicious works of by Robin Antar, Lisa Diller, Edie Nadelhaft, Douglas Newton, Michael Sorgatz, and Tony Toscani. This works were created using a range of media including carved marble, pastel, and oil painting. Each artist draws from a different inspiration within similar subjects.

Robin Antar is commenting on the current packaging and production of food items in relation to Contemporary Pop Art. By making these temporary edible forms into permanent forms carved from stone.

Lisa Diller’s subject is the works of art that are delicately constructed by French pastry chefs, documented in a Thiebaud style of composition. The luscious colors of fresh confections and honey glazes are documented the same way French Masters explored the plein aire traditions.

Edie Nadelhaft is fascinated by the ideas of magnification and the sense of taste that can be derived through observations of the mouth. Her cherry biter series explores the way luscious cherries are sensuously devoured.

Douglas Newton has been exploring the compositions of food items for some time. He finds delight in the reflective wrappings of candy and rises to the challenge of painting the nuances coming together.

Michael Sorgatz started painting pies for a school fundraiser pie social. The explorations reminded him of family ties to his grandmother’s farm life. The comfort and nostalgia is translated though visceral acrylic paint on canvas.

Tony Toscani finds solace and comfort in dining at diners. The relaxed atmosphere brings him heart-felt conversations enjoyed over edible sustenance. Toscani’s paintings document the table and the piles of food as seen in A Hungry Mans Breakfast.
Posted by Eleanor Traubman at Monday, March 21, 2011 No comments: Links to this post 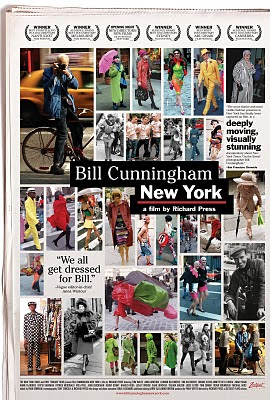 I've always loved Bill Cunningham's spread in the Style section of the Sunday NY Times. It's called On the Street and it's where he captures men, women, and even the dogs of NYC who sport stand-out outfits or accessories. I didn't know a lot about Bill going into the movie, except that he stood around 5th and 57th and took a lot of his shots from there.

This movie is quite moving. Bill is a man of great modesty and extreme integrity. His eye for stand-out style is incredible.

ABOUT THE FILM (taken directly from the film's website)

“We all get dressed for Bill,” says Vogue editrix Anna Wintour.

The “Bill” in question is 80+ New York Times photographer Bill Cunningham. For decades, this Schwinn-riding cultural anthropologist has been obsessively and inventively chronicling fashion trends and high society charity soirées for the Times Style section in his columns “On the Street” and “Evening Hours.” Documenting uptown fixtures (Wintour, Tom Wolfe, Brooke Astor, David Rockefeller—who all appear in the film out of their love for Bill), downtown eccentrics and everyone in between, Cunningham’s enormous body of work is more reliable than any catwalk as an expression of time, place and individual flair. In turn, Bill Cunningham New York is a delicate, funny and often poignant portrait of a dedicated artist whose only wealth is his own humanity and unassuming grace.
Posted by Eleanor Traubman at Sunday, March 20, 2011 No comments: Links to this post 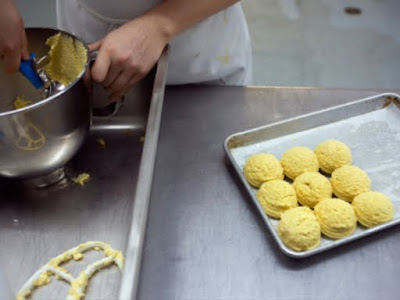 I was gonna scoot right back to Bklyn after a morning appointment in Stuytown on 18th and First. But the sun was so shiny and it drew me west on 13th Avenue. Good thing, too, because I ran into Momofuku Milk Bar. MMB is run by David Chang, a young and big time restaurant pioneer who shares the same alma matter as I. I had read countless articles and interviews with him as the focus. Really interesting guy, and I was curious to taste the Compost Cookie I kept reading about. So after wandering into Momofuku Ssam Bar and asking for the cookie, they directed me around the corner to the Milk Bar. That's where they sell his flavored milks, milkshakes, cookies, cake-based truffles, and cakes all made out of unusual flavor combos.

Stood in line looking at the offerings on the chalkboard menu. Tasted a sample of the Crack Pie soft serve. Decided Nah, I'll stick with the compost cookie. Too sweet for my taste but I loved the creative energy in this place. Noticed the collage of doggie photos above one of the eating counters and purchased a photo collage book of David's world called SCRAPS.

Please do check out this NY Times article to learn about the origins of the Milk Bar.

Psyched that I finally found this little gem, I kept heading west and ran into the giant Kiehl's Flagship Store on Third Ave. What actually drew me in was a sign outside for their Brooklyn Farmacy counter. Farmacy is a Brooklyn soda shop carved out of an old pharmacy in my neighborhood. So I was surprised to see a mini version of it inside of, all places, Kiehl's. But it did make sense, given the old fashioned theme of both places.

Oh, Kiehl's has a wall full of doggie photos too - hmmmmm, do I detect a theme in this neighborhood?

Then I went next door to Ricky's. Like many Ricky's now, there's a hair salon called Revolver tucked in the back. $55 for a hair blow-out (that's just a blow dry, no cut) - WHAT?!?!?!?!?!? This neighborhood is seriously pricey - that's the cost of a hair CUT in Brooklyn!!!!!

Anyway, I was happy with all the visual inspiration today. I am seriously motivated to go get a digital camera and a printer with a built-in scanner so I can start cranking out some creations of my own. So enchanted I was with Bella Foster's painting on the March Editor's Letter of the WSJ Magazine, that I wrote to Bella and asked her permission to post one of her pieces.

For more information about Bella, go to HER BLOG.
Posted by Eleanor Traubman at Sunday, March 13, 2011 No comments: Links to this post

YOU CAN NOW BID ON MICHAEL SORGATZ'S BROOKLYN BRIDGE PAINTING 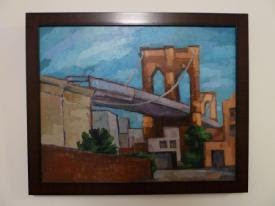 Hear ye, hear ye. All you lovers of the Brooklyn Bridge can now bid on Michael Sorgatz's well-loved painting which was once featured on the poster which advertised The 2008 Brooklyn Blogfest.

Proceeds from the sale will go to Public School PS 29.
Go HERE to join in the bidding fun!
Posted by Eleanor Traubman at Saturday, March 05, 2011 No comments: Links to this post