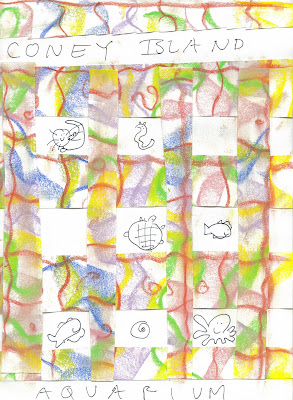 At the Coney Island Aquarium (actually called the New York Aquarium), the young adults who work there will come up to you while you are watching the sea otters and such through the glass of the tanks. If they (the employees) think you can hear them (it's noisy there in the underground with all the families), they will come up to you quietly and ask "Do you have any questions?"

Which is such a genius approach. Because, inevitably, your mind comes up with something it's been wondering about. Lovely that they are not bearing down on you in any way, just wondering what you are wondering about down there in the cool dark.

When one of the young women came up to me like that, I turned the tables and asked her some questions about herself and how she came to be there doing that job. She revealed that she had been through an intense training, and that she was there because she was interested in sea life.

Just seemed to make so much sense, so much more sense than having a young person working at, say, McDonalds where they are just there to churn out a product and a profit as quickly as possible.

This young woman, standing underground in the light cast by the sun coming in from the sea otter tank, was getting to talk and share about something she loved - sea life. And we were both the better for it. It just made sense.
Posted by Eleanor Traubman at Wednesday, August 13, 2008