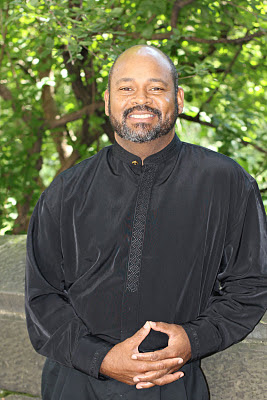 When Louis Henry Mitchell and I come out of watching archival footage of Jim Henson's television appearances as himself and as various Muppet characters, I ask Louis what he is thinking about.

"I never met him," replies Louis, referring to Jim Henson. "I've met his friends and family. I wish we could have met."

Still, Louis feels grateful that, as Sesame's Associate Design Director of Special Projects, he gets to "influence what Jim considered to be his [Jim's] most important work, and the work of someone [Henson] whose work is so important to me."

Louis' connection to Henson goes all the way back to his own youth, when he saw the Muppets on The Ed Sullivan Show and then watched Jim Henson come out from behind the scenes to shake Mr. Sullivan's hand.

"Seeing Jim Henson on tv triggered something in me," Louis reflects. "I thought if a man was doing that, maybe I could do that, too."

Years later, as an adult, Louis submitted his portfolio multiple times to the Muppet headquarters in Manhattan. After eight months of delivering his work, he was hired by Jim Mahon, a man who would become his Muppets mentor. From there, Louis quickly became a top licensing artist, creating art for many Sesame products. It has now been twenty years since Louis was brought on board the Sesame crew.

One of the challenges of Louis' work is "to keep growing in it, and not just relax in it." Along those lines, Louis feels it's important to remind the folks at Sesame Workshop that "It's about education and an art form, not just [about] business. [...] History means so much to me. I don't let it become a commercial venture. Everything should point back to the curriculum. Ultimately, for me, it is about the children."

When I ask Louis to expand on what he sees as being his unique contribution to Sesame, he has this to say:

"I keep everyone thinking like children, to not lose sight of who the work is for. We have a sacred mission to reach out to children, to families around the world. It's a sacred trust. We have to keep things interesting without resorting to sensationalism. I see this as not just a job, but a mission."
And with a show that claims such longevity (Sesame is now entering into its 43rd season), how does Louis find a balance between innovation and tradition?

"It's really about how things blend and grow together," reflects Louis. "History is influenced by technology. Innovation looks back and respects history. You don't forget where you came from."

One place where Louis himself has balanced, in a literal sense, that respect for both history and
technology is in his job of overseeing the making of the Sesame balloons for the Macy's Thanksgiving Day Parade in New York City. For this special event that is witnessed annually around the globe, Louis has supervised the construction of both the Super Grover and Big Bird balloons as well as the float that the actors and Muppets ride on through the parade.

As Louis explains: "Aerodynamics and physics are incorporated into the design. More cables were needed for Big Bird, causing him to have a bigger than usual head and shorter- and smaller-than-usual legs. I resculpted the balloon to give it more balance and everyone was happy."

Louis brings leadership to other Sesame initiatives as well. Product managers consult with him about decisions around characters, like what phrases and slogans they (the characters) should use on toys and other various products. Louis has also been the one to answer letters which children write to Sesame characters.

Louis' advice for other people who want to make a living from their craft?

"Discover what is in your heart and let it speak to you. Who are you here to be and what are you here to do? It's all about discovery. Once you find out what that is, do not hesitate or you will block the flow. Give it all you got."
Posted by Eleanor Traubman at Thursday, January 12, 2012