JIM HENSON AND FRIENDS: INSIDE THE SESAME STREET VAULT 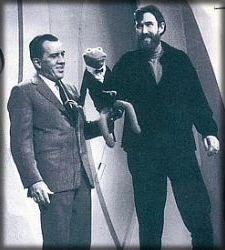 If you haven’t taken yourself to MOMI’s exhibit Jim Henson’s Fantastic World, you really should! The exhibit, which has drawn huge numbers of people, has been extended to March 4. It includes special Muppet screenings in the theater, and the remaining screenings and special exhibit-related events can be found HERE.


I started the year by going to see Jim Henson and Friends: Inside the Sesame Street Vault. Compiled by Jim Henson Legacy President and longtime Muppet writer Craig Shemin, it’s an expansive look at the appearances which Jim Henson and other key Muppeteers made on variety and talk shows of the 1970s.

The compilation also features clips from “Old School” Sesame Street.
Vault starts with Kermit making an appearance on The Ed Sullivan Show. He is sitting at the piano, singing What Kind of Fool Am I? while Grover continuously interrupts him. This clip got lots of laughs from the packed audience.
Here’s some other highlights from Inside the Sesame Street Vault: