GOOD NEWS! NEWSIES IS COMING TO THE PAPER MILL PLAYHOUSE! 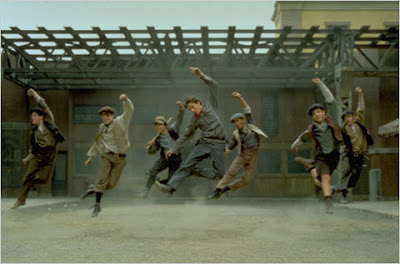 I am out of my mind with excitement to hear that Disney's Newsies! The Musical is coming to the Paper Mill Playhouse in Millburn, New Jersey. This production has an all star team behind it: Alan Menken is doing the music; Jack Feldman is doing the lyrics; Christopher Gattelli is responsible for choreography; direction provided by Jeff Calhoun.

I first saw Newsies on DVD. It's not your typical Disney movie, which is why it may have originally flopped commercially when it came out in 1992. (Photo above by Disney. See Christian Bale (!) in center as the lead.) It's about young people fighting for justice by organizing a labor strike against the media big wigs.

To find out more about the show and purchasing tickets for it, click HERE.

If you want to get information about Newsies Fan Day, click HERE.

Here's the NY Times official announcement of the event, written by Dave Itzkoff:

Stop the presses! Or should that be, restart the presses? Either way, “Newsies,” the misunderstood but much-loved Disney movie musical about the New York City newsboys who organize a labor strike in 1899, is getting a second edition. On Monday, the theater said that a stage version of “Newsies” would be the opening production at the 2011-12 season of the Paper Mill Playhouse in Millburn, N.J., and would feature music by Alan Menken (the film’s original composer) and Jack Feldman (its original lyricist) as well as a new book by Harvey Fierstein.

“The truth is, things have a life of their own,” a mildly stunned Mr. Menken said in a recent telephone interview.

Mr. Menken, who also composed music for Disney blockbusters like “The Little Mermaid,” “Beauty and the Beast” and “Aladdin,” is hardly unaware of the reception that greeted “Newsies” when it was released as a film in 1992. The movie, which starred an 18-year-old Christian Bale as a singing, dancing, paper-pushing urchin named Jack (Cowboy) Kelly and was directed by Kenny Ortega (the future director of the “High School Musical” franchise), was torn apart by critics and spiked by audiences, grossing less than $3 million on a budget of $15 million.

Not that Mr. Menken felt burned at the time. “I won three Academy Awards within the course of three years and one Razzie,” he said. “The Razzie was for ‘Newsies.’ ”

But in the years that followed, “Newsies” sold surprisingly well on home video, and Mr. Menken continued to see it turn up in the lives of his children.
“I’d come to a mall, and there would be one of those areas where people perform,” he said. “They’d be doing ‘Seize the Day,’ I’d go, ‘Look at that!’ And then I’d find out, ‘They’re doing “Newsies” at my school.’ I said: ‘They are? How are they doing that?’ ”

More recently, Mr. Menken said he was contacted by his agent, who told him that Disney was preparing a version for the stage.

Recalling the conversation with his agent, Mr. Menken said, “He told me: ‘You don’t have to get involved. They’ll take your songs, and someone else will come and write new ones. I just want to let you know.’ I said, ‘Oh, no. No, no, no. It’s my baby, no.’ ‘Alan, there’s not going to be any money.’ ‘I don’t care. I don’t care, this is my baby.’ ”

The Paper Mill Playhouse production, which will run from Sept. 15 to Oct. 16 and has not yet announced its cast, has “latched onto exciting elements of what we had in the movie” and is “minimizing the things that were not so great about the movie,” Mr. Menken said.

The principal newsboys, Jack, David and Les, will remain the main characters, and a new female character — who will serve as a love interest for Jack — has been created for the stage show.

“Newsies” die-hards will also be pleased to hear that the newsboy Crutchy — so named for the crutch he walks on — is staying in the story. (“Crutchy’s a bigger character than he ever was,” Mr. Menken said. “Crutchy’s very pivotal. Very pivotal.”)

On the advice of his younger daughter, Mr. Menken said he had been trying to work a female newsgirl character into the lineup as well.

“My daughter went to a girl’s camp where they did ‘Newsies,’ and they invented a character of Swifty for her to play,” Mr. Menken said. “She said, ‘Dad, if you ever do “Newsies” on stage, you’ve got to let Swifty be in the show.’ I’m still working on that one with Harvey.”

Though his daughters, now 22 and 25, are not officially on the payroll, Mr. Menken said their input had been crucial to the development of the “Newsies” musical, even when it was not asked for.

“They are more protective about ‘Newsies’ than all the other projects I’ve done, combined,” Mr. Menken said. “It is ridiculous. It’s really ridiculous. When I told them about a certain song that got cut, they got viscerally angry at me. ‘Oh no you don’t. Oh no. No, Dad, no.’ It’s like they own it and I don’t.”

Mr. Menken said he had frequently encountered similar reactions from fans in their teens and 20s.

“It’s like ‘Newsies’ is actually owned by this generation of kids,” he said. “Of course, I’ll be the one to collect the royalties, thank you very much.”