DAVID DORFMAN AND THE PROPHETS OF FUNK 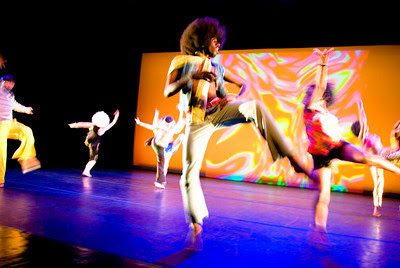 
Before heading into watch David Dorfman's The Prophets of Funk at Jacob's Pillow Dance Festival, I sat on the back porch steps outside the theater to listen to dance scholar Maura Keefe provide a context for the piece we were about to see. Here's what I learned:

* Growing up, Dorfman was an athlete. He played baseball and football and his highly-athletic choreography is informed by that.

* Dorfman grew up in the 1960s. His life and his work reflect his commitment to social change and his belief in democratic engagement

* Much of his choreography has elements of contact improvisation. His dances reflect his belief that anyone can lift anyone as long as the mechanics are right.

* His choreography is about the politics of identity; he presents and challenges ideas about gender, race, and sexuality

*His work is inspired by the music of the 1960s and 70s, particularly "its call for freedom"

* Prophets of Funk is set to the utopian music and collaborative essence of the music of Sly and the Family Stone. The Family Stone was one of the first racially and gender integrated bands in American music history

*To choreograph the piece, Dorfman watched old footage of the band

The first thing that happened when we sat down at our seats to watch David Dorfman's The Prophets of Funk is that a young woman invited audience members to come down to the stage to learn a dance - a funky dance. We had our eyes on a couple of elderly gentleman who were really getting down on the dance floor!

At the end of the show, Dorfman invited all of us to come and dance on stage - so we did! This final gesture was definitely democratic engagement at its finest!
Posted by Eleanor Traubman at Friday, September 02, 2011