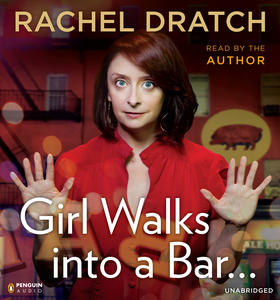 I recently journeyed to The 92YTribeca, an offshoot of the 92nd Street Y, to see Person Place Thing Live! With Rachel Dratch and Andy Cohen.  As the Y explains:


The concept behind Randy Cohen’s public radio series Person Place Thing is simple: he invites notable figures from all genres and backgrounds to discuss one person, one place and one thing about which they feel passionately.  Since people often reveal themselves most intimately when they speak not directly about themselves but about something important to them, PPT goes a step further than the traditional one-on-one interview.

I was really excited to see Rachel Dratch, who played characters such as Debbie Downer and Allie McBeal during her 7-year run as a cast member of Saturday Night Live.

I was also really curious to learn more about the woman who left SNL in order to join the cast of 30 Rock, and then was replaced by another actress on 30 Rock.  She had also been snubbed by Vanity Fair when they excluded her from "Women in Comedy" cover story that showcased Rachel's close friends like Tina Fey, Poehler, Kristen Wiig, and Maya Rudolph.

A lot of comedians have a kind of hard-edge, defensive, "always-on" quality which Rachel did not have. She had a low-key sweetness about her that was kind of refreshing.

For her PERSON, Rachel talked about Muffin, the dog that her family had when she was a child.

For her PLACE, Rachel chose to describe the old-timey ale house where she would hang out in Chicago while "trying out the improv thing" during her 20s.  The improv community became her whole social life.  Says Rachel of her peers at that time "We bonded through the terror of improv."

For her THING, Rachel held up a special cookbook that her mom made for her.  Each recipe connected to a Saturday Night Live sketch Rachel had performed in.  For example, there was a "Debbie's Pineapple Upside Downer Cake." (Rachel is famous for her Debbie Downer sketches.)

During the Q and A portion of the evening, I asked Rachel what it was like -- both good and challenging -- to be a woman in comedy.  She said she was of two minds about this topic. On the one hand, she was happy to have had a long run on SNL and  grateful for the other women of SNL who had paved the way for her to be on the show.  On the other hand, Rachel expressed how acutely aware she was of  the lack of good roles in Hollywood for women comics.

If you read Rachel's book, Girl Walks Into a Bar, you gain a pretty sharp picture of the harshness of the sexism toward women in Hollywood which Rachel alluded to in her answer to my question at the Tribeca Y event.

When the book opens, we find Rachel at home, after having been replaced by Jane Krakowski on 30 Rock.  Rachel  is getting phone call after call from her agent for parts for explicitly "unattractive" and bizarre women. (I use this word in quotations since attractiveness is a construct.)

Comedy, especially sketch comedy, is supposed to be about any person, regardless of their physical appearance, being able to play any character at all.  But because of how rigid Hollywood is about the physical appearance and the age of the females they cast,  we lose out on awesome talent like Rachel Dratch.  This is a huge bummer.

If you want to see what Rachel is up to these days, go HERE