CHECK OUT THE BOX THAT ROCKS AT BROOKLYN'S MoCADA 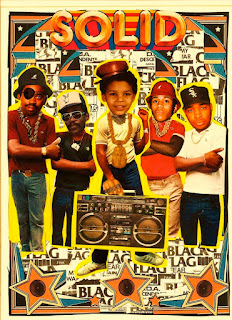 The Museum of Contemporary African Diasporan Arts (MoCADA) is proud to present THE BOX THAT ROCKS: 30 Years of Video Music Box and the Rise of Hip Hop Music & Culture

In 1983, Ralph McDaniels launched Video Music Box, a groundbreaking television program that ushered in the popularity and innovation of music videos. As the show’s creator and host, and the producer and/or director of over 400 music videos, Ralph McDaniels is a pioneer whose influence is still felt throughout the music industry.

It is safe to say that hundreds of Hip Hop, R&B and Dancehall artists owe their street credibility, record sales, and a great deal of their commercial success to Video Music Box. At its inception, Video Music Box broadcasted videos from all genres of music. However, it was one of the first television programs ever to feature Hip Hop videos primarily. In the early 1980’s, networks such as MTV did not play the music videos of black recording artists. Video Music Box ushered in a new era of cultural identity, innovation and entrepreneurship.

Ralph McDaniels also recognized the show’s power to speak directly to inner city youth in a way that no one else was doing at the time. Each day, McDaniels used the show as a platform to spread messages of unity, non-violence, anti-drug abuse, anti-crime, political activism and self-respect. “I have continued to produce Video Music Box independently for over 30 years as a testament to the art form. Video Music Box is the place where classic visuals have been documented and new music continues to flourish on a television program produced by someone who controls their own content and vision,” states Video Music Box creator, Ralph McDaniels. “The show represents hope for those in the African-American and Latino community who want to express themselves freely without the chains of corporate America. The fact is that Video Music Box has always been an important outlet for those creating Hip Hop or any other genre of music. I believe that people from any race or background can learn from the show’s message of positivity and contribute to the culture.”

MoCADA’s Founder and Executive Director, Laurie Cumbo remarks, “Ralph McDaniels is a Brooklyn icon and he has played a foundational role in the development of Hip Hop culture. We are honored to celebrate his contributions through THE BOX THAT ROCKS exhibition here at MoCADA.”

THE BOX THAT ROCKS is guest curated by Dexter Wimberly, and is on view from March 10 through May 28, 2012 in the museum’s main gallery at the James E. Davis 80 Arts Building in Brooklyn, New York.

The opening reception will take place at MoCADA on Saturday, March 10, 2012 from 6-9pm.

The reception is free and open to the public.