SO GREAT TO SEE MY NEPHEW AND BROTHER ON THE BIG SCREEN: A REPORT BACK FROM MANUFACTURING STOKE 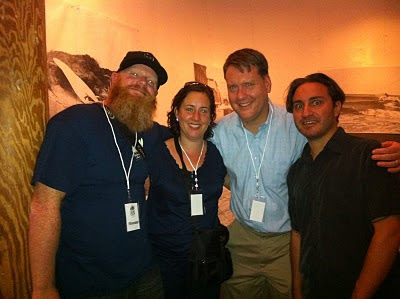 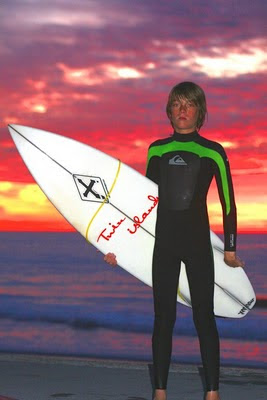 For the past bunch of months, I had been hearing from my brother, Adam, about this film , Manufacturing Stoke, that his friend, Pierce Kavanaugh, was making. The film was about the evironmental impact of how surf gear gets manufactured. I knew also that Adam and his teenage son (my nephew) Niko were in the film.

So I asked Adam if Pierce thought the film would be in the upcoming New York Surf Film Festival.

A few weeks later, it was confirmed that, yes, Stoke would be in the line-up at the festival. This was great news!

Of course, my first wish is that Adam and Niko could fly out to NY from San Diego with Pierce for the NY premier. But Niko had just started school, so it didn't make sense.

So the next best thing happened - I got to meet the fantastic Mr. Kavanaugh and his awesome wife Petra, plus the crew of lovely folks who had worked on and appeared in the film. We hung out at the Film Festival launch party in SoHo. Pierce asked me "Do you call your brother Trout?" (That is my brother's name amongst his friends.) I said "No, I just call him Lil' Bro." Pierce laughed.

The following night, my husband Mike and I ventured out to see Manufacturing Stoke.

Right after we got our seats, I texted my brother:

"Can we yell out 'Hey, there's Adam! There's Niko!' when we see you guys on the screen?"

My brother texted back: "Ummmmmmmmmm, no."

But we did some yelling anyway.

It was kind of emotional to see my brother and Niko larger than life on the movie screen. I mean, the camerawork was fantastic and the crew captured these guys' love for the sport and for the ocean. Plus, I KNOW these guys! I held Niko in my arms just days after he was born. I played with Adam practically every day of my life as a young child. So I sort of did have to choke back the tears.

I'm incredibly proud of everyone who worked on this film and so pleased that my brother and his son got to have this experience together.